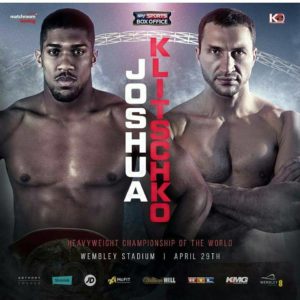 Tonight Britain’s Anthony Joshua defends his IBF Heavyweight title against 41 year old former division kingpin Wladimir Klitschko. The bout was a quick sell-out and 90,000 plus will cram Wembley Arena for what is expected to be more of a blood-ritual and a coronation than an actual contest. So heralded is the 27 year old Briton and so equally respected, but disliked is the former champion, Klitschko, that most expect tonight’s fight to be the official start to the Age of Anthony Joshua. That could very well be the case, he is favored to win by as much as 5-to-1, but if Klitschko can banish all remnants of his performance in his last fight, a unanimous decision loss to Tyson Fury in December of twenty-fifteen, Wladimir poses a quantum leap up in clash for the very green young champion.

Anthony Joshua has rocketed to stardom in British boxing and has revived the heavyweight division with his knock-them-cold style; he’s 18-0 with 18 kayos. No one has yet to fight into the eighth round against the twenty-twelve gold medalist for Great Britain. Joshua gets about the business of bashing out his opponents right away, and thus far none have held up for long, with the exception of amateur rival Dillian White who stung him in the second round and lasted into the seventh before ending up horizontal just like all of Joshua’s professional foes. A troubled teen with legal entanglements who used boxing to keep him on the straight and narrow, Anthony Joshua is articulate and handsome and poised to become a very rich man in boxing’s unlimited class. Boxing, especially heavyweight boxing, is where concussive force can and will rule the day. But skill and experience have to count for something.

Like him or loathe him, Wlad Klitschko deserves respect. Sure, some of his biggest wins were among the worst fights this fight-fan has ever seen. But Wladimir’s jab and grab, bash and mash, clutch-for-dear-life style has racked up the wins. Wlad Klitschko was a dominant champion. The division he ruled was certainly not the best and the brightest in heavyweight history but that doesn’t reduce his credibility considering any champion can only fight what’s available to him, and no one would deny that of Klitschko. He holds the second longest reign in the division’s history (Joe Louis 11 years 8 months, W.Klitschko 9 years 7 months) and won 18 consecutive title defenses, only two men have done better than that (Joe Louis 25, Larry Holmes 20). As much as he has never been embraced by the American fight-fan, Wladimir Klitschko is a sure-to-be Hall-of-Famer and was a dominant heavyweight champ.

Isn’t Klitschko too old, his reflexes too blunted? Perhaps. But despite losing the heavyweight Championship in his last fight, he wasn’t beaten up, he was outmaneuvered and out-thought. In terms of conditioning, Klitschko has a lot of mileage on him but he is a consummate professional and is likely to be in the very best condition an athlete of his age could be in. And for an ex-champion, he’s hungry. Klitschko was first denied the rematch with the self-destructive, drug- addicted Tyson Fury who upset the Ukranian in December of twenty-fifteen in the greatest boxing upset you would never want to watch again. For twelve rounds Fury used his reach advantage to befuddle Klitschko with a pawing jab and clever movement. It was ugly but Fury completely diffused Klitschko’s offense and had him spooked about throwing anything for thirty-six minutes. Tonight he is going to be in a fight for his life against Joshua. That could go one of two ways for Wlad. Joshua may find Klitschko’s chin in the opening frame the way Corrie Sanders did and this will be less of a fight and more of a blood sacrifice. But Klitschko turned in what was likely the best performance of his career when faced with a guy who attacked him back in twenty-fourteen against Kubrat Pulev. When attacked on that night, Klitschko fought back aggressively and put Pulev out in destructive fashion. Everyone keeps talking about how Klitschko won’t be able to take Joshua’s best shots, but let’s not forget that the old Ukranian packs quite the wallop himself. This could end up a gun fight in the opening round with two heavyweight monsters firing cannon-blast right hands at each other. That’s why 90,000 people coughed up their cash to see it live and why millions will be watching it on television. Both men can crack.

The late great trainer of Wlad Klitschko, Emmanuel Steward, was often frustrated with Wlad’s hesitancy to use his size and strength. Always concerned about protecting his chin, and perhaps for very good reason, Wladimir Klitschko doesn’t fight like the big man he is. To win tonight he is going to have to fight bold and mean and use everything he’s got. These two guys know each other well and have been downright chummy in the pre-fight meetings. But both guys are pros and that niceness should go right out the window by tonight’s ring walks.

Dull as shit though his reign has been, Wladimir Klitschko has skill. And skill usually beats blunt force trauma. This could very well be one of those night’s where skill gets stretched by predatory, bone-numbing force. It’s actually what I’m rooting for. I want Joshua to drive out those bygone days of Klitschko’s safe but effective victories. But I don’t think that’s going to happen. All those year’s weren’t for nothing.

Klitschko by knockout, in the best win of his life.

Blast from the Past – Michael Spinks