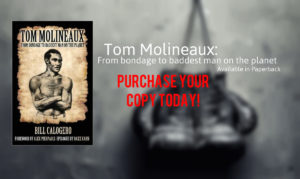 Tom Molineaux: From Bondage To The Baddest Man On The Planet
By: Bill Calogero

Two hundred years before Mike Tyson, there was Tom Molineaux! In his first book, Bill Calogero shines a light on one of the greatest unsung pioneers of the prize-ring, “Tom Molineaux. Learn why Tom Molineaux should be considered the first American Heavyweight Champion. See what dastardly deeds blatantly robbed him of being the first American World Heavyweight Champion on a cold and rainy day in England during December of 1810. Examine the early days of what would become The Sweet Science. Meet the men who slammed fist against flesh and bone in the wild, outdoor, rough and tumble world of bare-knuckle boxing during the early nineteenth century. Read of the great triumphs and tragedies in the life of Tom Molineaux, the first great American sports celebrity. Tom Molineaux was born a slave and fought his way to freedom, riches and fame. See for yourself why Tom is an important part of American history and why it’s such a tragedy that he’s virtually a forgotten figure today. Bill Calogero’s “Tom Molineaux: From bondage to the baddest man on the planet” will introduce you to a part of American history that should not be forgotten 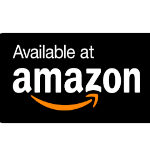 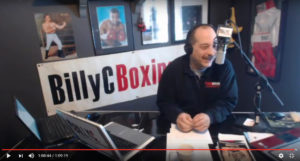 Watch The Billy C Show Live WEDNESDAYS @ 5:30 pm EST or watch the Replay Whenever you want!