With all the hype surrounding Anthony Joshua’s unification bout with Joseph Parker it’s easy to forget that David Price is in a massive fight against Alexander Povetkin, a fight in which Price was to win then he’d propel himself back in to world title contention.

Once apon a time ago Price was Britain’s next heavyweight hope, he was the guy who was gonna become world champion and reign supreme with his punch power and good boxing technique, a time in which Tyson Fury was seen as underneath him. Unfortunately for him that unravelled in a big way when he was defeated by Tony Thompson via a second round knockout, he also lost the rematch via knockout too. Since then he has fought journeymen and when he has had a step up he has been stopped in both European title contests against Erkan Teper (Teper failed a drugs test) and Christian Hammer.

I believe Povetkin will win the fight quite comfortably but one has to think what if? What if Price lands a right hand and stops him, regardless of what we think about his ability as whole we all know he carries great power. He wins this fight and he is suddenly on Joshua’s radar, he is suddenly in line to face Tyson Fury in a fight we wanted back in 2012/2013, he could also go to America and challenge Wilder. The opportunities would open up all of a sudden.

“I am desperate,” he told BBC Sport. “I am up against it. But in every sport, there are upsets weekly.

“It’s a massive opportunity for me to turn around my boxing career. I have to get the win and change my life in the process.

“I’m not supposed to win this fight. It can wipe out any negativity in my career.”

Me personally I hope he does win as it would be one more name to throw in too the heavyweight hat and bring further excitement to a division that has sparked back in too life recently.

All the talk, all the build up and all the hype culminated in a rather easy points victory for Hackney man Lawrence Okolie as he proved many people wrong tonight as he produced two knock-downs on route to his victory.

From the off Okolie showed his strength as he moved Chamberlain around the ring with ease, scoring a knockdown in the first round with a glancing right hand. Things got worse for Chamberlain as he was docked a point in round two for holding.

The fight was quite a gritty affair as referee Steve Gray constantly warning both fighters about holding, this is how the fight progressed until the sixth round as Chamberlain touched the canvas after another right hand. There was points in the contest that Chamberlain made Okolie miss but couldn’t punish him as such the fight continued to be a scrappy affair which ended in a comfortable points victory for Okolie.

Okolie will be looking at a British title shot according to promoter Eddie Hearn who said this after the fight,

“Okolie has a lot to learn, but it’s a big win from Okolie, he was impressive in parts, but other parts he has to work on.

“Isaac got hurt and tried to recover. It was very scrappy. A big ten rounds for Okolie’s career.

“Both guys have a future, Isaac will come back while Okolie will move forward to British title shots as soon as possible.

Many people chose Chamberlain to win tonight but I picked Okolie purely because of his size and strength. Okolie looked like a heavyweight tonight and it showed. 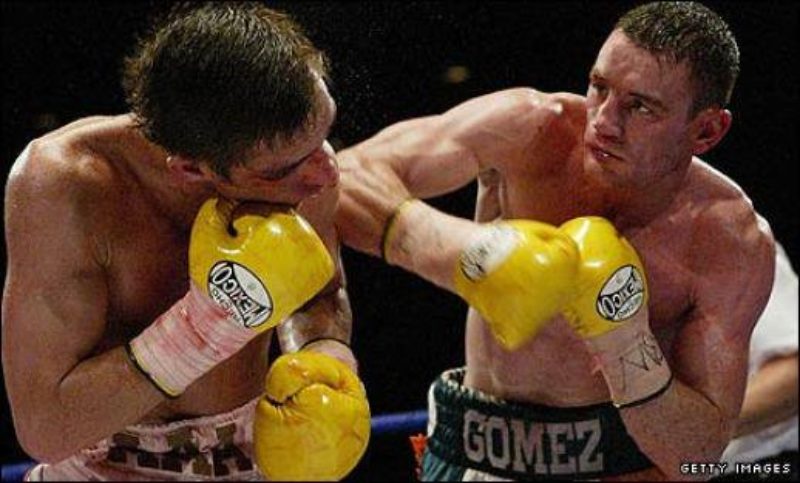 I’m aiming to provide you with at least one classic British boxing fight per month for those of you who lay not have seen certain British contests. This month I’ll start with a classic and personal favourite of mine and we look no further than this classic fight between unbeaten British Super Featherweight champion Alex Arthur vs the highly unfancied brawler Michael Gomez.

The fight took place at the Meadowbank Sports Centre, Edinburgh, Scotland in front of a sold out crowd who were experiencing the first professional boxing card in twenty years to be held in the city. Alex Arthur who was born and raised in Edinburgh was a rising star in British boxing at the time with a record of 16 fights 16 wins and 13 coming via stoppages, this was supposed to be a routine defence of the British title against a fighter who at the time was was 29-5 but the Irish born Manchester fighter had other ideas.

The boxing press decided that Gomez had absolutely no chance and that he had been through too many wars throughout his career and Arthur would ease past him even Arthur himself decided that Gomez was an easy fight by saying that he could see twenty ways to beat him but Gomez proved his critics and Arthur wrong when he arrived at the fight in great condition and with fire and purpose. The first couple of rounds started at a great pace, with Arthur keeping Gomez at distance with stiff jabs and Gomez working his way inside with hooks and body punches. The match was turning into a clash of styles, Arthur using control and boxing technique and Gomez storming forward with great might. From the third round the fight went Gomez’s way, Gomez cut Arthur in the third and stunned the home crowd in too silence, who were not used to seeing the home-town hero being bludgeoned in this manner. Gomez dominated the rest of the fight and in the fifth round it came to an end after Arthur was knocked down twice and eventually stopped.

Please watch the video and enjoy it as it was a great fight.