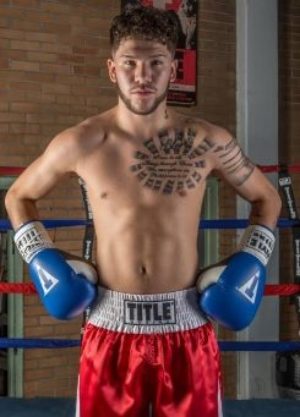 PARK CITY, Kansas (May 1, 2017) – 2016 Olympic bronze medalist Nico Hernandez returns to the ring on Saturday, June 17, at home in Wichita for his second professional fight. In his professional debut on March 25th, Hernandez turned in an impressive performance, entertaining nearly 3,200 passionate Kansas fans as he defeated Patrick Gutierrez in the fourth round of the main event.

The 21-year-old Hernandez displayed tremendous poise and a few tweaks to his amateur style, adding a devastating body attack, in addition to effectively switching from his orthodox stance to southpaw at times.

“I feel that there will be even more people there this fight than at my pro debut,” Hernandez said. “I live only a 10 to 15-minute drive from Hartman Arena, north of Wichita.

“I worked hard on body punching for my pro debut. I didn’t do that in the amateurs (no scoring points) and I’m getting use to switching to southpaw. Both were in our game plan and successful in my firsts fight. I’m excited to get right back in the ring, especially at home. Our plan is to fight every two to three months and have a total of four fights this year.”

“Gutierrez was the perfect opponent for Nico’s pro debut,” commented John Andersen, who promotes Hernandez as well as the June 17th show. “He was tough but now it’s time to step it up a little against a 2-0 opponent with two knockouts. Nico is starting to climb the ladder to get him where we want him to go. We need to move him quicker than an average fighter, largely due to his amateur background, and he’ll probably have only one more sixround bout after this before moving him up to eight.

“I thought he looked a little nervous in his pro debut at the start, but that’s expected for a fighter making his pro debut at home in front of nearly 3,200 people, and after that he was great. We couldn’t have asked for anything more and he did get in some rounds that will be helpful.

“This fight will be close to where Nico lives. Nico really connects to kids in the community, often speaking at local schools, and this is the perfect opportunity for parents to bring their children to watch him fight on a weekend night.

“We’re calling this show, ‘Rapid Fire,’ primarily because of Nico’s exciting style, firing crisp combinations in rapid succession, in addition to his activity level as he comes right back to fight so quickly.”

Hernandez’ father and head trainer, Lewis Hernandez, believes fans will see a more improved, well-rounded fighter in this fight. “Nico showed his body punching and he switched around a little to fight left-handed,” he explained, “which weren’t part of his boxing style in the amateurs. Fans will see the fighter Nico really is but this fight he’ll get back to boxing more. I told him that he needed to go to the body as a professional fighter but that each punch doesn’t have to be as hard.   Sometimes I need to remind him of that because he’s a fighter at heart.

“I knew he’d be okay in his pro debut (nerves-wise) because he gets going as the fight goes on. When he hurts his opponent, he comes on even stronger. I just tell him to box and be himself. He’s always well-conditioned so he can go rounds without a problem. I want him to be fast and elusive to take away his opponents’ body and then, in later rounds, go back to boxing. He fought at 115-pounds but he’ll be back to 112 for this fight. Nico was strong at 115 and he’ll be very strong at flyweight.”