On Saturday night at the MGM Grand, Grand Garden Arena in Las Vegas DAZN broadcast the WBA Super and WBC middleweight champion Saul “Canelo” Alvarez versus Sergey “Krusher” Kovalev for Kovalev’s WBO light heavyweight title. In the lead up to fight night question was “how will Canelo handle light heavyweight power?” and “Can Alvarez bring enough power with him to hurt a full fledged light heavyweight?”. The questions on Kovalev would be “Can Kovalev handle Alvarez sustained body attack?” In recent fights Kovalev has shown to be vulnerable to the body and Alvarez has not stopped an elite fighter above 154 lbs making both valid questions.

Once the bout started it would be Canelo Alvarez who played part of the aggressor, he walked forward trying to close the gap  while Kovalev used his jab. As rounds passed Canelo continued pressuring Kovalev looking for a way inside, on occasion Canelo would throw a wide hook that missed its target while Kovalev answered back with small combinations. Once round six started we seen a slight change in the tempo as Canelo started finding a home for his body punches and Kovalev began to hold in order to disrupt Alvarez momentum.

We would see Kovalev go into complete defensive mode during round seven while Canelo opened up his arsenal pinning Kovalev on the ropes for most of the round, Kovalev comeback in rounds eight and nine as he picked up his punch output, landed several clean shots around Alvarez guard, the tenth was hard to score due to both having their moments. A hook to the ribs of Kovalev paused the WBO title holder forcing him to hold.

With Kovalev slightly up on my card 97-94 entering round eleven, it appeared as though he could pull out the win many observers and members of the sport on social media also having him ahead. Then with just over a minute left in round eleven, Canelo landed a combination that sent Kovalev backwards and followed up with a hook which sent him to the canvas leaning against the ropes.

That final combination was enough to end the affair and give Canelo a world title in his fourth division, with championships now at junior middleweight, middleweight, super middleweight and light heavyweight Alvarez cements his claim as boxing’s number one fighter pound for pound. With the newly won WBO light heavyweight title added to his collection Saul “Canelo” Alvarez improves to 53-1-2 (36) while Sergey Kovalev suffering his fourth loss drops to 34-4-1 (29).

The future of Sergey Kovalev remains unclear,  he entered this bout as a huge underdog despite being the longest reigning title holder at light heavyweight and we have seen decline of the once vicious “Krusher”. A combination of age and going 4-4 in his last eight bouts is proof enough he has seen better days as a fighter.

In the co-feature undefeated lightweight prospect Ryan Garcia took on WBO NABO title holder Romero Duno also at stake would be the vacant WBC silver championship. This bout was proposed earlier this year when Garcia, who was slated to fight on the undercard of Jaime Munguia versus Patrick Allotey had his opponent Avery Sparrow end up arrested on a warrant.

This was a short affair as Duno came right after Garcia looking to make short work of the undefeated twenty one year old. Once Duno landed a hard right hand Garcia answered back with a combination of his own that put Duno on the canvas ending the contest at 1:38 of round one. With his win Garcia improved to Garcia 19-0(16) while Duno now stands at 21-2 (16).

In an exciting female flyweight contest for the interim female WBA flyweight title,  which was fought using three minute rounds rather than traditional two minute rounds for females, 2012 Olympic Bronze medalist  Marlen Esparza took on WBC silver title holder Seniesa Estrada. This was an all action contest fought at a high skill level, there were no clear rounds in favor of either fighter, it was the volume of Estrada versus the pressure of Esparza who was also landing the cleaner punches.

It was one of the most evenly contested matches of the night until an accidental head-butt in round six opened a cut on the forehead of Esparza. In-between rounds the corner of Esparza did a great job controlling the bleeding and the fight remained close but several more butts would take place slowly wearing Esparza down. At the end of round nine she was asked by referee  Robert Byrd if she was having issues with her vision and when Esparza replied “Yes” the contest went to the scorecards.

Without fail Las Vegas judges had to deliver an absurd verdict when scores from judges Tim Cheatham, Chris Flores and Steve Weisfeld were announced they read in order 88-83, 89-82 and 90-81 all in favor of Seniesa Estrada who along with the interim WBA flyweight championship improved to 18-0 (7) while Marlen Esparza suffering her first loss now stands at 7-1 (1).

While the fight could have been scored in favor of wither lady, these wide margins were in no way justified.

In his pro boxing debut Evan Holyfield 1-0(1) son of former heavyweight champion Evander Holyfield, only needed sixteen seconds to dispatch Nick Winstead 0-2. Once the bell rand Holyfield came out of his corner and let loose a nonstop barrage of punches that sent Winstead to the canvas.

While the stoppage was premature and Winstead not really hurt due to the manner in which he responded to Holyfields pressure was enough for referee Robert Hoyle to wave it off immediately.

The opening contest in the Cruiserweight division was between seventeen year old Tristan Kalkreuth and Twon Smith. The former multi time national champion Kalkreuth boxed his way to win number three when scores read 39-37 and 40-36 on all three cards. It will be interesting to see how this young fighter develops in future contest.

Make sure you tune in on 11/10/2019 when the crew of Talkin Boxing with Billy C TV & radio return to breakdown the event in its entirety. 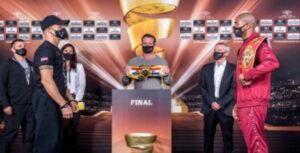