Friday night at the Buffalo Run Casino Miami, Oklahoma, an edition of ShoBox was presented by GH3 Promotions, DiBella Entertainment and Holden Productions. In the main event undefeated Super Lightweight prospect’s Ivan Baranchyk and Keenan Smith faced off in an ugly eight round feature. The hard hitting Baranchyk, fighting for the sixth time at the venue fought a reckless and amateurish style. His punches were wide, he led with his head and even the canvas twice due to his own momentum after missed punches. While Keenan Smith had moments of success, his time was spent more worried about possibly being butted, fouled or tripped to the canvas than being able to implement a fight plan.

The referee Gary Ritter, who would play an unnecessary role in several bouts failed to keep Baranchyk under control and even deducted a point from Smith for holding while Baranchyk moved his head recklessly during clinches. In the end despite his efforts Baranchyk failed to get the stoppage he had been seeking, though he did win a unanimous decision by scores of 80-71, 79-72 and 78-73. With this win Baranchyk improved to 17-0 (10) while Smith suffering his first loss dropped to 11-1 (5).

If referee Gary Ritter would have done his job correctly, Smith who when able to box and not concentrate on avoiding fouls his skill was several levels above that of Baranchyk and had a very strong chance to pull off the upset. In my opinion that speaks more about the lack of skill Baranchyk possesses than what Smith at this stage does.

The cards most entertaining contest, took place between undefeated super lightweights Kenneth Sims Jr and once beaten Rolando Chinea. It was a fast start for Sims Jr, it appeared early his superior speed and jab would make  for an easy nights work. That all changed after the second round, Chinea slowly imposed his will on Sims Jr, with a steady attack to the head and body, while none of the punches were overly hard the pressure from Chinea drained the stamina of Sims Jr his. only offensive output were “Shoe-shine” moments at the end of rounds. In the eighth and final round, both fighters managed to find hidden stamina and closed the bout strong trading punches until final bell.

While he was less skilled and vastly slower, the determination of Rolando Chinea overcame the talent advantage of Sims Jr earning him a majority decision victory. The official scores read 77-75 twice and 76-76, in my opinion the 77-75 scores were accurate. With his win Rolando Chinea improved to 15-1-1 (6), Sims Jr after suffering his first loss stands at Kenneth Sims Jr- 12-1 (4).

Highly thought of middleweight prospect Antoine Douglas, continued his journey towards title contention by stopping a vary hard hitting Juan De Angel in four rounds claiming the vacant WBA-NABA middleweight title. The fast rising career of Douglas was paused when he suffered a tenth round TKO loss against hard hitting Avtandil Khurtsidze in March of 2016. Since Douglas has won two straight prior to facing De Angel though neither opponent possessed the power of De Angel.  He stated after Friday’s win “I knew some adjustments needs to be made in camp and with my team after the loss, I have been working on those and on portions of my skillset that need improvement”. With his win the 24yr old Douglas improved to 22-1-1 (16), Juan De Angel drops to 20-7-1 (18).

The first televised bout too placed between super bantamweights Adam Lopez and undefeated Glenn Dezurn. This was a rugged bout, mixed with skill unlike what was witnessed between Ivan Baranchyk and Keenan Smith. When Glenn Dezurn was able to use his uppercut he had tremendous success, Lopez  used body work to halt that momentum. This was the other bout in which referee Gary Ritter made himself too known, threatening to deduct a point from Lopez anytime a body shot on the beltline landed.

Those threats did not deter Lopez who continued wearing Dezurn down pinning him against the ropes where he landed successful combinations. The final scores read exactly as they did in the Rolando Chinea and Kenneth Sims Jr bout 77-75 twice and 76-76, difference here was Judges were split on those 77-75 scores making it a majority draw. My scores read 78-75 in favor of Lopez due to his effective aggressiveness. With the outcome Glenn Dezurn- 9-0-1 (6) now stands at Adam Lopez- 16-1-1 (8).

In an undercard bout- Bantamweight Joshua Greer Jr improved to 14-2-1 (6) when he pummeled Leroy Davila in the fourth and fifth rounds of their scheduled eight round contest. Up until those rounds it was a close affair, the amount of punches Davilia absorbed forced his corner to halt the contest after the fifth had ended and they did so wisely. With his win Joshua Greer Jr improved to 14-2-1 (6), Leroy Davila now stands at 5-2 (3).

When factoring in the scores for Dezurn versus Lopez and Sims Jr versus Rolando Chinea, the way referee Gary Ritter interjected himself without cause, deducting a point from Keenan Smith, allowing Ivan Baranchyk to fight reckless, threatening Lopez for borderline blows. It was apparent, everyone involved were doing their best at finding ways that keep the “A’ side fighter with undefeated records intact or at worse appear the fighter were closer on paper than what took place inside the ring. The referee for those bouts Gary Ritter seemed intent on deducting a point from any fighter he possibly could justify doing so, and in my opinion deducting the point from Smith for trying to keep Baranchyk from fouling him was that opportunity. He realized no one would complain if the crowd favorite was given an extra bit of assistance. 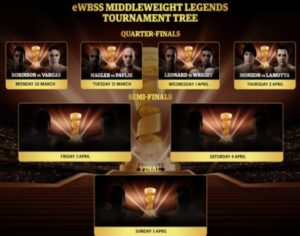 The eWBSS continues on Monday with ‘eWBSS Middleweight Legends Tournament’