Saturday night on HBO from the Forum in Inglewood California, Golden Boy Promotions, Zanfer Promotions, Teiken Promotions, Main Events and Star Boxing joined together to host a tremendous triple header featuring some of the sports most exciting fighters. In the main event, WBC super featherweight champion Miguel Berchelt made the first defense of his title against Takashi Miura, who lost that same title to Francisco Vargas the fighter Berchelt won it from this past January.

It was a “Matador versus Bull” type contest, as the very dangerous Miuara stalked Berchelt kept him off balance using combinations and foot work. There would be a flash knockdown in round one scored by Berchelt and brutal body punches landed by Miuara that had Berchelt gasping for air in later rounds. It was not the most exciting contest either fighter has participated in but both entered with a game plan and stuck with it. At the end it was Berchelt whose plan worked out for the better giving him a unanimous decision victory, official scores read 116-111, 119-108 and120-109 all in favor of Miguel Berchelt who retained his title and improved to 32-1 (28), Takashi Miura now stands at 31-4-2 (24).

The most exciting fight on the card, was between Jezreel Corrales and Robinson Castellanos for Corrales WBA Super World super featherweight title. It started with Corrales using his superior movement and boxing ability winning the first two rounds. An accidental head-butt in round two, invigorated Castellanos who applied pressure and started throwing body punches in high volume. A monumental round took place for Castellanos in the fourth, when he dropped Corrales not once but twice by punishing his body then following with combinations to the head. 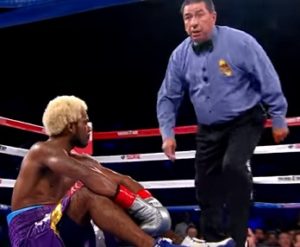 Corrales goes down from a Castellanos uppercut.

They traded momentum in rounds five and six, Corrales scored a knockdown in the seventh after catching Castellanos with a punch he didn’t see, then went to win the eighth and ninth rounds. In round nine Castellanos turned the momentum back in his favor while Corrales posed more than punched. 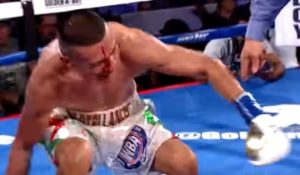 Castellanos going down in round 7 from a Corrales left hand.

The tenth round would last only thirty seconds before a brutal head-butt, opened a cut under Castellanos eye and now with two cuts that had blood flowing freely, the ringside doctor advised referee Jerry Cantu to the contest. When scores were read, the judges seen it officially 94-93, 96-92 in favor of Corrales and once even at 94-94 allowing Corrales to retain his titles with a majority decision victory. With the win Corrales retained his title and improved to 22-1 (8), the hard luck Robinson Castellanos who always puts in a great effort now stands at 24-13 (14). With any luck the right thing will be done and a rematch made before Corrales faces another opponent.

A highly anticipated light heavyweight bout took place, between hard hitting Smith Jr and Sullivan Barrera for the WBC International light heavyweight title held by Smith Jr. When an overhand left dropped Barrera early in round one, it appeared this was going to be a short night for Smith Jr who has been battering opponents in highlight reel fashion lately. Once Barrera went down Smith Jr immediately ran to the ropes in a premature celebration, a bad habit often developed by fighters who begin to rely on their power. When Smith Jr jumped off the ropes he turned around to find Barrera and ready up ready to fight, the round finished with Smith Jr absorbing punishment from Barrera.. 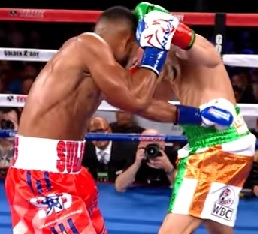 Smith Jr drops Barrera in the first with a left to the head.

The next nine rounds would be all Sullivan Barrera, landing continuous crisp clean combinations that backed Smith Jr to the ropes then snapped his head with uppercuts. On Occasion Smith Jr would get in a counter punch when Barrera dropped his hands, those were few and far between without enough power to deter the attack of Sullivan. 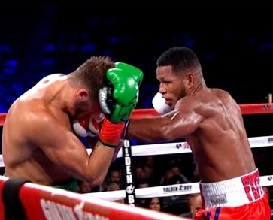 At one point, Barrera was handling Smith Jr so easily referee Jack Reiss went to the corner of Smith Jr and asked “Are you OK, you don’t normally fight like this”, in reference to Smith Jr the normally aggressive fighter entering what can best be described as “Survival” mode. This bout originally scheduled for twelve rounds, Star Boxing and Main Events promoters for the fighters agreed to a ten round limit on fight day. This was a wise decision by team Smith Jr considering as the tenth ended he was leaning forward and stamina seemingly non-existent. In my opinion should the fight have headed to the twelfth, Smith Jr more than likely would have ended up being stopped by Barrera who was showing no signs of fatigue. The final scores read 96-93, and 97-92 twice all in favor of Sullivan Barrera who along with claiming the 175lb WBC International light heavyweight title improved to 20-1 (14), Joe Smith Jr now stands at 23-2 (19). 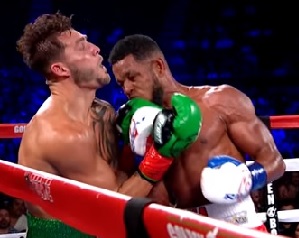 Barrera snaps the head of Smith Jr back with clean uppercuts