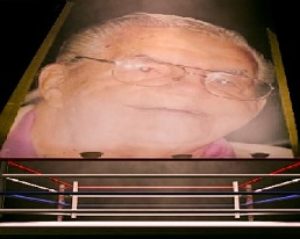 By: Daxx Khan – March 9, 2017
It was with deep sorrow to hear another one of boxing’s greats, Hall of Famer Lou Duva passed away March 8th at age 94. Starting in 1963, after Joey Giardiello his first champion defeated Dick Tiger for the middleweight title, Duva worked almost four decades, guiding not only some of the modern eras but boxings all-time greats.
As a trainer, Lou worked with world champions and title challengers, Pernell Whitaker, Evander Holyfield, Mark Breland, Vinny Pazienza, Meldrick Taylor, Jose Luis Lopez, Michael Moorer, Alex Arthur, Tyrell Biggs and Andrew Golota. As a Manager, Duva guided Johnny Bumphus, Rocky Lockridge, Shaun George and multi-division title holder Zab Judah towards success.
He was more than one of boxing’s most successful trainers and managers, he was one of its larger than life figures. I believe Lou Duva, might be the only manager and trainer whose own memorable moments, equal that of his fighters.
Who could ever forget the time, Lou went at it with Roger Mayweather after his win over Vinny Pazienza?  The referee might have turned a blind eye to Mayweather hitting Pazienza late, that didn’t mean Lou was letting it go.  It might have temporarily cost him his manager’s license and $750 dollars but he put boxing on notice. “Lou Duva doesn’t take guff from anyone”.
It wasn’t just his fighter’s opponents, promoters, trainers and referees were also confronted if they crossed Duva or his fighters. When Mike Tyson stopped Lou’s fighter Tyrell Biggs, Tysons promoter Don King mocked Biggs and Duva from ringside. His comments infuriated Lou, he went after King, looking to dish out his own punishment, security guards would stop him just feet before King was in reach.
The most famous or perhaps infamous public moment, involving Duva came on July 11th 1996, that was the night Andrew Golota and Riddick Bowe met for the first time. When Golota was disqualified for low blows, a mini-riot ensued. The commotion caused his defibrillator to go off, he was taken from the ring on a stretcher, in what could be best described as a “Micky Goldmill” moment. It was a real life Rocky 3 situation.
Those were just a few of many, Lou Duva moments. Was he a bit extreme? At times, yes, no debating that fact, one thing was for certain though. If you were with Lou Duva, he had your back, even if it meant taking on all comers.

While he was a larger than life figure, he was also that guy we seen a little of ourselves in, Duva had that “Fella from the Neighborhood” persona we could relate to. The fact we seen him down, yet refuse to stay down on multiple occasions, made him all the more likable. Even during his worst moments.
In his 94 years, Lou Duva lived a long full life. During his years in the sport, we watched Lou call it as he seen it. There were many times, when Lou should have thought things through before reacting. Yet he was the type guy who, always did what he felt was right “Now” and always with the best interest of his fighters. Whatever consequences might follow, could be dealt with later. That’s what separated him from everyone else in the business. It’s what made Lou Duva one of boxings greats.
In an era, where people seem more worried about “Consequences” then what’s right, we could use a few dozen more, Lou Duva types in boxing today. If anything, just to point fingers when the “Powers that be” fail at doing their job. Let’s hope now, he can sit with other past greats of the sport, look down and say “They are doing it right”. He did his part in helping lay the foundation, it’s up to the new generation to capitalize and do him proud.