Daxx Khan 5 years ago
Budding women’s boxing superstar, community activist, role model and two-time Olympic gold medalist, Claressa Shields has been bestowed with another honor, as she has been announced as the winner of the 2017 Nickelodeon Kids’ Choice Sports Award for “Biggest Powerhouse.”
In winning the prestigious award, which honors the heaviest hitters, strongest sluggers and unstoppable players in sports each year, Shields beat out a field of such well-known stars as Demarcus Cousins (New Orleans Pelicans), Von Miller (Denver Broncos), David Ortiz (Boston Red Sox) and Mike Trout (Los Angeles Angels).
“It is a tremendous honor and great thrill to win the Nickelodeon Kids’ Choice Sports Award because it comes from the kids,” said Claressa Shields. “I work hard every day to show all children that nothing in life is impossible if you believe in yourself. If this kid from Flint can win Olympic gold medals, boxing world championships, and succeed in life, then you can do it too!”
Shields’ promoter, Dmitriy Salita, says she deserves all the incredible accolades and honors she’s received.
“Claressa is a true champion of the people with her incredible story of overcoming adversity through her own self-belief and determination. Her accomplishments, inside and outside the ring, make Claressa a real-life American hero and an inspiration to every young person.”
22-year-old Shields (3-0, 1 KO), from Flint, Michigan, is currently in training for her first world-title shot on August 4 against German star and WBC Super Middleweight World Champion Nikki Adler (16-0, 9 KOs). The 10-round super-middleweight match-up, will be televised live on ShoBox: The New Generation (10 pm ET/PT), and held at MGM Grand Detroit.
The Nickelodeon Kids’ Choice Sports Awards are the only kid-oriented award show focusing on the world’s best athletes and each year’s greatest sports moments. Held at UCLA’s Pauley Pavilion in Los Angeles, this year’s broadcast was once again hosted by Seattle Seahawks quarterback Russell Wilson.

The winners were chosen predominantly by children’s online voting. 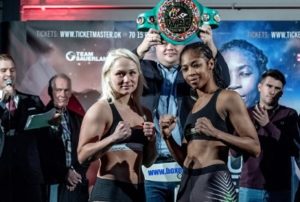