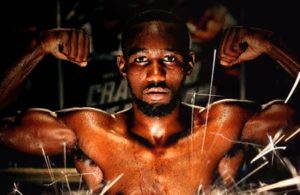 There was a lot of backlash from fans about the choice of opponent for Crawford for this defense, what many of those critics didn’t seem to know is Kavaliauskas who was not only an undefeated former Olympian but Crawford’s mandatory opponent as ordered by the WBO.

It was an exciting fight, Crawford as we are accustomed to seeing started out slow, in the third round Kavaliauskas not only won the round by out landing Crawford but dropped the champion. While referee Ricky Gonzalez ruled the knockdown a slip upon review it was clear Kavaliauskas had legitimately sent Crawford to the canvas.

Once round four began there was a change in the demeanor of Crawford, the champion was intent on taking control of the bout and that is exactly what happened. The two fighters exchanged blows inside and while Kavaliauskas held his own Crawford slowly broke him down especially from the southpaw stance.

A barrage of punches that landed cleanly by Crawford forced Kavaliauskas to take a knee in round seven, the vicious assault of Crawford continued for another two rounds putting Kavaliauskas down twice more in round nine before referee Ricky Gonzalez called a halt to the action.

In the co-feature hard hitting IBF lightweight champion Richard Commey took on undefeated prospect Teofimo Lopez, there were mixed picks by fans and experts on who would prevail in this matchup. Would Lopez power be enough to rattle an iron chinned Commey and could Lopez handle the power of Commey at such an early stage of his career were the most frequently asked questions.

It only took two rounds for an answer as an overhand right from Lopez dropped Commey in round two ending the affair. With the win Teofimo Lopez the new IBF lightweight champion improved to  15-0(12) while Commey now stands at Richard Commey 29-3(26).