Once again the “World Boxing Super Series” excelled in terms of expectations, the two champions Dorticos and Gassiev went at it without holding back for almost twelve full rounds. When the two fought at a distance, the rangier Yunier Dorticos would often get the better of the exchanges but inside Murat Gassiev with his shorter more compact punches did the more telling damage. Through the first eight rounds, this was a “Pick-em” contest with no one fighter having extended offensive control until round nine when Gassiev started landing short hooks and uppercuts that shook Dorticos legs.

In round eleven Gassiev punished Dorticos in close, the WBA title holder found himself in a position he had never been before as a professional “Hurt hoping to Survive”. On their stools between rounds eleven and twelve, Murat Gassiev appeared the fresher of the two fighters while Dorticos was breathing heavily. When they entered the ring for round twelve, Dorticos walked to the ring center slowly while Gassiev looked to capitalize on his opponents condition. In under a minutes time Gassiev had Dorticos on the canvas taking a mandatory eight count.

Once up Dorticos would have little time to recover as Gassiev applied relentless pressure and despite valiant efforts to hold Gassiev off, Dorticos punches which are normally dangerous were slow and without power behind them. A short left hook from Gassiev would send Dorticos to the canvas a second time. The punch landed by Gassiev, very much resembled one Dorticos himself landed this past September that halted Dmitry Kudryashov in the tournaments quarter finals. 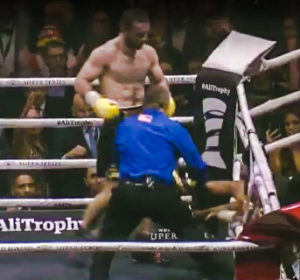 Murat Gassiev sends Yunier Dorticos through the ropes in round twelve

The WBA title holder count showing heart and desire would once more beat the count but that desire was met with sheer aggression from Gassiev that drove Dorticos backwards pinning him against the ropes. With Dorticos on the ropes, Gassiev unleashed a brutal combination that sent Dorticos through the ropes a almost onto a ringside officials table. Without hesitation referee Eddie Claudio halted the contest at 2:52 of round 12.

At time of the stoppage official scores read 105-104 and 106-103 twice in favor of Murat Gassiev with those last two rounds being the difference. With his win Murat Gassiev now the IBF and WBA unified cruiserweight champion, improved his resume to 26-0 (19) while Yunier Dorticos suffering his first defeat now stands at 22-1 (21).

It was an incredible performance by both men and certainly will be considered as a “Fight of the Year” canidate I am sure at the years end. With all we have witnessed so far in this tournament, the final between Murat Gassiev and Oleksandr Usyk in May will certainly be a can’t miss event. Whichever of those two fighters goes home with the “Muhammad Ali Cup” will have certainly deserved it and all participants so far have shown to be elite caliber fighters that have helped raise this divisions status as possibly “The One to Watch” in all of boxing.