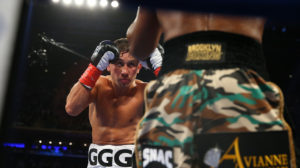 By: Daxx Khan – March 20, 2017
On Saturday night, prior to Gennady “GGG” Golovkin and Daniel Jacobs stepping into the ring, the outcome was already solidified in fans minds “Someone was getting knocked out and in sensational fashion”. The reasons on, who and why when asked, always returned the same responses. Those who chose GGG stated “Jacobs has been stopped before, Pirog stopped him, GGG has twice the power and skill. He was down against light punching Sergio Mora, no way he last twelve round against Golovkin”.
The Jacobs supporters stated “GGG looked beatable against Kell Brook, if a blown-up welterweight had success, Jacobs combination of power, size and age advantage will be too much for GGG. This is the perfect time to take advantage of a declining champion”.
Instead of a brutal KO win for either fighter, we were given a closely contested, high quality bout. One where both fighters used their minds and physical skillset. In doing so, it seems the majority, who didn’t witness the knockout they craved are disappointed.
Instead of GGG absorbing punches willingly, a strategy he has implored in past bouts, one that opens his opponent up for counter shots. The shots that when he lands, usually ends fights. He rolled with punches, used a high guard, made sure he didn’t risk over extending himself.
He did this because, he knew Jacobs was bigger, allowing him to absorb punches better than other opponents. He knew the longer reach of Jacobs, would make it difficult to get in close and work the body without paying a heavy price. Instead he chose to pick his shots, not become over anxious, risk being countered himself. He waited to deliver his power shots when he knew the target was in range.
As for Jacobs, he knew GGG was not Peter Quillin, trying to jump all over him, meant risk being countered. One is all a guy like GGG needs to end the night. A knockdown in round four, reminded him just how quick it could end. He knew GGG had issues with guys who move in the past, his reach and footwork was key.
The predictions and expectations prior to fight time were credible. Considering the history of each fighter, in terms of finishing opponents in dynamic fashion. We were not in the ring, we were not taking the punches and despite what was said during the buildup, both fighters also knew something else. They knew the counter points of those predictions.
It’s true, GGG looked slow against Brook. With Brook, having naturally faster hands and feet, GGG at any time in his career would have looked slower. The size difference was also exaggerated, Brook a very large welterweight, fought nine times as a junior middleweight and high as middleweight prior to the GGG bout. Also, GGG, had prepared for another opponent, Brook was a replacement opponent.
It’s also true, Daniel Jacobs was stopped by Dmitry Pirog. He was also winning, on all three scorecards when stoppage occurred. That was in 2010, this is 2017, a whole lifetime in boxing years. Since Jacobs, continuously raised his level of competition in each bout, stopping everyone in his path. A KO loss, doesn’t always mean a fighter has a suspect chin. If it did, Henry Armstrong, who lost his pro debut by stoppage, would have never went 180 more bouts, losing just one more by stoppage. Claiming world titles, in three divisions at the same time, when there were only eight divisions and one title in each.
Team Jacobs and team Golovkin took those into consideration going in. Each fighter knew what the public expected, a war with someone looking up towards the lights when it ended. The fact, each fighter did what was needed, to avoid that ending, without sacrificing their integrity inside the ring as a fighter. Is something only, the absolute elite are capable of.
If anyone who watched, cannot understand, more importantly appreciate what, Gennady Golovkin and Daniel Jacobs did Saturday night, regardless of who won is not a boxing fan. They are a “Fight Fan”, fight fans are good for business, they strip boxing of its integrity while keeping the sport in business. They do it simply because all they understand are knockouts and their rationalization on who should win comes from the internet. This continued trend will soon leave promoters and fighters with little choice, if money is to be made. Give the masses their basic entertainment, let them gorge in subpar quality. Just keep them happy, it’s not as if they know the difference nor do they care about quality.
There have been empires, who collapsed for those same reasons, instead of pleasing the social media trolls now for PPV buys, someone should Google how that ended. Since the UFC stealing boxings thunder daily isn’t enough. 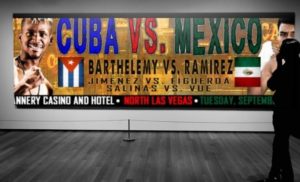