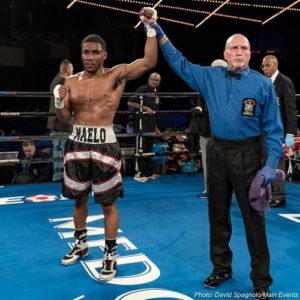 Two-time New York Golden Gloves champion Ismael Villarreal has passed plenty of tough tests in his life. They include the recent final exams the 21-year-old Bronx native passed as a full-time student majoring in physical education at Brooklyn Community College. But Villarreal is also a champion at time management, and now he’s putting his summer “vacation” to good use, training in Puerto Rico ahead of his return to the ring in Atlantic City on Saturday, August 4 at the Hard Rock Hotel and Casino’s Etess Arena.

Villarreal (2-0) will face Kieron Hooks (2-0-1, 1 KO) of Philadelphia in a battle of unbeaten junior middleweight prospects.

Just one week after completing his coursework for the spring semester, the boxer traveled to Puerto Rico so he can concentrate on training with Jose Santiago far from the distractions of home. With the ability to train full time during his summer break, Villarreal admitted training has been “rougher” this time.

“Now I’m training three times in a day,” he said. “In New York, I’m so busy with school. Now it’s just boxing, eating, sleeping and resting. I think I made a good decision, I will come back here whenever I have the time.”

During his rare breaks in preparation, Villarreal has been able to explore the island, both the beautiful beaches and scenery along with the destruction still remaining from Hurricane Maria in 2017. “It’s beautiful and new to me, but I passed by areas really destroyed. Near the gym, there is a church and homes destroyed. The hurricane is still there.” He even enjoyed a training session for the first time on the beach last week, and said he enjoyed it.

For his upcoming bout, Villarreal says he’s working more on his defensive skills.
“My goal is to win and try not to get hit. If I win, that’s what I want. I want to take as few hits as possible.” But the ultimate goal of winning by knockout is something the New Yorker always craves.

As Villarreal begins to rise up in the division, his college classmates and his school have become more aware of his activities outside of class, with his college posting supportive comments on Instagram. “It’s cool, they are really nice people,” he said, adding that it’s made him aware how important it is to provide a positive example for other people. “I have to be careful. I’m in the position where people are looking at me. The kids that look up to me, I have to set an example. If they want to get somewhere, it takes hard work and belief,” explained Villarreal. He says he refrains from posting too much about himself on social media, but admitted there are a few “funny videos” of himself goofing around that his close friends and family know about.

One thing the former amateur champion never goofs around about is his dedication to a goal, whether to become a world champion in the ring or earn his bachelor’s degree in secondary education so that he can teach high school in the future. “With time management, once you apply yourself, you start finding time. We have been doing this quite a while. We know how to play the game,” he explained.

After an exceptionally tough spring semester, Villarreal says he’s glad to focus full time on boxing through his August 4 bout. Then he’ll be back for his final semester at Brooklyn Community College starting August 20, and then transfer to a four-year university in 2019. In the meantime, he plans to fight three to four times a year.

Even someone as driven as Villarreal needs support and inspiration. He credits his father, his family and his friends for providing all that he needs. “There are times I think, maybe I’m not cut out for this? Everyone has their moments. People around you can motivate you. This is more about life, not boxing … When it comes to life, people all have their experiences you can learn from,” he emphasized.

Hrgović and Mansour weigh-in ahead of WBC International title clash