World class boxing lands at NYCB LIVE, home of the Nassau Veterans Memorial Coliseum in Uniondale, New York on Saturday November 11 live on HBO Boxing from 10pm ET/PT in the US and on Sky Sports in the UK with former Middleweight World Champion Daniel Jacobs topping the bill against undefeated and decorated amateur Luis Arias.
Brooklyn born ‘Miracle Man’ Jacobs faces his first hurdle in the path to prove he’s the best in the division and regain his World Champion status after taking Gennady Golovkin the distance in Manhattan
Arias sees the clash as the perfect change announce himself on the world scene though, and the Milwaukee man is a dangerous proposition for Jacobs as a two-time USA national champion as an amateur and USBA champion.
A stacked card in support of the Middleweight blockbuster promises fireworks as Brooklyn’s exciting Heavyweight KO machine Jarrell Miller looks to stake his claim on a Heavyweight World title shot – and in his way is Polish giant and former World title challenger Mariusz Wach.
Opening the action-packed HBO telecast will be Super-Lightweight knockout artists Cletus Seldin and Roberto Ortiz squaring off in a 10-round bout, with unbeaten ‘Hebrew Hammer’ Seldin looking to make a big statement to get a major title shot. 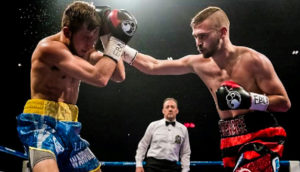