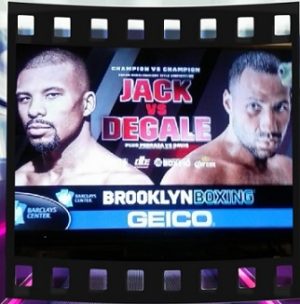 With four common opponents, winning their titles, a month apart in 2015, each against a Dirrell brother, Jack and DeGale were on an unavoidable collision course. When they met Saturday, fans hoped, this bout would decide “Who is the best Super Middleweight in Boxing”. The champions, did their best to provide that answer, neither gave into the moment and put on their best career performance to date.
They would trade knockdowns, Jack went down in the first and DeGale the twelfth. The footwork of DeGale, kept Jack at a distance, using crisp clean left hands to snap Jack’s head back. When he closed the distance, Jack and his trademark body work punished DeGale, draining his energy. Even referee Arthur Mercante Jr, took punishment when an accidental hook from Jack, rocked him at the closing of round five.

With a steady eleven rounds behind them, both men exhausted looking to edge out the win, they closed the twelfth with non-stop action, bringing those in attendance at the Barclay’s center on their feet. It was a rare fight, where you wanted neither man to lose, because neither deserved a loss after their efforts.

In the co-feature, IBF World super featherweight title holder Jose Pedraza, took on unbeaten Gervonta Davis. It was a dominating performance for the 22yr old challenger, while Pedraza managed to put Davis out of his comfort zone, he was never able to sustain momentum. The power and speed of Davis, caught up with Pedraza in the seventh round, when he was dropped in the corner. After barely beating the count, Pedraza would be pinned on the ropes and needed saving by referee Ricky Gonzalez moments later.

When undefeated middleweights, Levgen Khytrov and Immanuwel Aleem stepped between the ropes, fans were treated to another war. It started and ended in dramatic fashion, Aleem almost closed the show in round one, battering Khytrov all over the ring. He would be on the receiving end in round two, after punching himself out, Khytrov would batter him non-stop. The momentum swayed back and forth for the duration, Aleem hurting Khytrov, punching himself out then absorbing every bit of what he dished out.

The affair would end in round six, after Aleem landed a huge blow that Khytrov was unable to recover from. Immanuwel Aleem improved to 17-0-1 (10) and claimed the vacant WBC Silver middleweight title, Khytrov in his first loss stands at 14-1 (12).

In her first WBO female super bantamweight title defense, Amanda Serrano took on former two division title holder Yazmin Rivas. It was an all action bout, with neither lady taking a moments rest. While Rivas was game, she could not overcome the size and power advantage of Amanda. After nine rounds of non-stop action, they finished by trading for two entire minutes, proving once again the females can deliver in terms of action.

Make sure to listen to our Post-Fight show by visiting our YouTube Channel, hear what everyone from the TalkinBoxing with Billy C show and fans had to say. https://www.youtube.com/user/talkinboxing 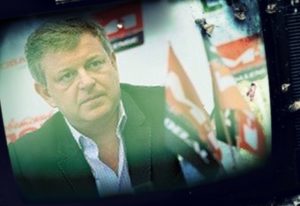