Despite a game showing from Dezurn, 26-year-old Hernandez was able to keep Dezurn at bay while landing long power shots. When Dezurn was able to make it inside, Hernandez would simply push him back. At the end of eight entertaining rounds, the judges’ scorecards read 79-73, 78-74, and 77-75, all for Hernandez.

“It feels great. I think I looked impressive,” said Hernandez. “I was winning every round. The game plan worked very well. I was trying to stay on the outside, with me being taller than him. My defense was better than his. He did more running than I thought he would. It was a good experience to fight another undefeated guy.”

The win over Dezurn was Hernandez’ “second 0 in a row.” Last August 4, at MGM Grand Detroit, and televised live nationally on ShoBox: The New Generation, Hernandez stopped Russia’s then undefeated Vladimir Tikhonov in five.

“Taking somebody’s 0 gives me the confidence to keep doing it,” continued Hernandez. “These are tough guys I’m fighting now. As I pick up fights and rounds, I feel like my experience is making me better and better. I feel like it’s to my advantage to be in tough every time like this.”

“Jesse’s speed, power, aggression and ring generalship were very impressive in this competitive match-up. With this win, Jesse showed that he is one of the best 122-lb contenders in the world. Boxing fans will hear more and more about him in the near future. The plan is to keep Jesse busy while increasing his exposure, to get him in position for a world title shot next year.”

“Things are going great. I feel like I’m with the right team,” said Hernandez. “Salita believed in me like I believe in myself. I will talk to my team and we’re looking forward to fighting again in January or February.” 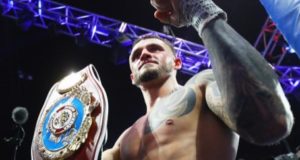