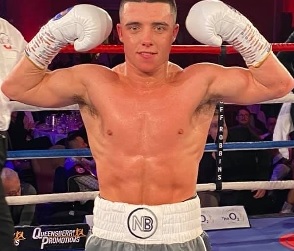 Unbeaten super-featherweight star Nick Ball moved up to 11-0 with a devastating second-round KO against tough Nicaraguan Johnson Tellez (10-50-5) at the Hilton Hotel in Mayfair on a Frank Warren-promoted Nordoff Robbins charity event.

The 22-year-old dropped his opponent in the opening round and finished him off in clinical fashion in the following round to bring his perfect record up to 11 wins with five KO’s.

His durable ring rival hadn’t been stopped all year until he met the ‘Wrecking Ball’ on the 323rd day of 2019.

Ball’s trainer Paul Stevenson was proud of his 135-pounder’s performance, stating: “He was in top form, working behind a snapping, powerful left jab, dropping his man in round one then cranking up the pressure in round two, landing with vicious attacks, letting go with left and right hands, which brought the crowd to their feet before the ref had to intervene.

“It was a big statement and a great stage to do it on. There was a ton of celebrities in the audience and boxing people, including Frank Warren, Tyson Fury, David Haye and John Conteh, who were all very impressed with Nick’s performance.”

It caps off a brilliant year for the youngster, with four wins from four in 2019 and a considerable rise in the rankings, which now sees the super-featherweight ranked in the top 10 with his latest win, in touching distance of British champion Sam Bowen (15-0).

Three of those four victories during 2019 were stoppages, the sole points win came against London 2012 Olympian Abdon Cesar (3-10) in his last fight on September 21 at the Greenbanks Sports Academy in Liverpool. Ball headlined the Black Flash Promotions event and won all six rounds against the 2011 All-Africa Games bronze medalist.

The undefeated Liverpudlian was a Junior ABA champion and is now trained by Paul Stevenson at the thriving Everton Red Triangle Gym. 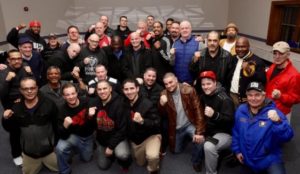 BRIEDIS AND PEREZ HIT THE SCALES IN BERLIN: READY FOR ALI TROPHY ACTION!