The first pro boxing event ever in Framingham, “Fight Night In Framingham” is a presentation of Shearns Boxing Promotions (SBP), for the benefit of Fighting Life, an after-school youth boxing and academic empowerment program, Fighting Life, which is available 100-percent free of charge, to students beginning in elementary school through high school education.

The son of Albanian immigrants, Xhema has a 3-4 MMA record, mostly in top-rated Bellator competition. His route into combat sports was the result of the courts sending him into an anger management program.

“I got into a lot of street fights when I was young and then I went away to prison,” Xhema explained. “When it was time for me to get out a close friend kept encouraging me to try MMA at a local gym. I got out, started training, and began MMA fighting. Fighting is humbling. I’m hurting people all the time (in MMA and boxing), so there are no reasons to street fight anymore.

“I grew-up boxing but got into MMA because it’s the closest to street fighting. I still plan to do MMA. I just had back-to-back MMA fights that resulted in me breaking both hands. I needed surgery. The smaller gloves (in MMA) are different. I hit hard but I can’t hit as hard with MMA gloves. (Tyson) Fury, (Deontay) Wilder and others got me excited again about boxing.”

Xhema’s opponent, Almeida, is a popular, experienced New England-based MMA fighter (20-11) who will be fighting in front of his hometown friends and family from Framingham. He is winless in 13 pro boxing matches with three draws.

“I don’t know my opponent, but I respect him,” Xhema said. “I don’t care about records or what people say. They don’t matter It’s going to be a fun night and I’m definitely excited. I can’t wait to get in there and do what I love. Hey, I get excited going to spar.

“For a short time, I did kick boxing. I just love to fight!”

All fights and fighters are subject to change.

EXCLUSIVE: Inoue Discusses His WBSS Fights & Looks to the Future 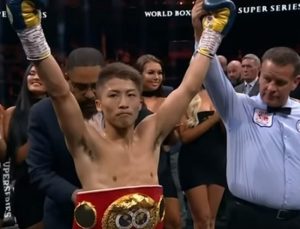