All three emerged victorious June 29 at Foxwoods Resort Casino, highlighting a sold-out event promoted by CES Boxing. In addition to their success and dedication inside the ring, they are active within the community and have stood out as exemplary role models. Dawson, a former two-time world champion and pound-for-pound king in the light heavyweight division, will receive the Key to the City while Belenchia and Williams will be awarded special proclamations.

“As mayor, I’m proud of every New Haven resident who goes on to become accomplished in his or her chosen field: the three athletes to be recognized this week have become role models for young people in New Haven, and embody the connection between commitment, dedication, hard work, and professional success,” Mayor Harp said. “For athletes, and for others who strive to succeed, fitness, endurance, and expertise are useful and productive skills for young people to develop.”

The 37-year-old Dawson made a triumphant return June 29 following a two-year layoff, defeating Quentin Rankin by unanimous decision in the main event. It was Dawson’s first win since 2016 and the 35th in his illustrious career. The veteran southpaw continues to share his boxing acumen within the community since opening the Chad Dawson’s Championship Breed Boxing Gym in nearby Hamden.

“It’s a pleasure and an honor to receive a key to the city I was raised in and where I learned so much,” Dawson said. “I’m truly honored to be home and to have a chance to fight in front of my family and friends. Thank you to New Haven and Mayor Toni Harp for this award.”

In the co-main event June 29, Williams kept his perfect record with his 17th career win by defeating Filipino veteran Neil John Tabanao by unanimous decision. Belenchia, an accomplished veteran mixed martial arts fighter, made her long-awaited pro boxing debut on the undercard with a unanimous-decision win over Delaney Owen.

“I am very thankful to have the opportunity to be recognized for fighting and doing what I love, especially alongside two top local household names,” Belenchia said. “It is an honor to be able to set the stage for future female fighters, in what has been, for years, a male-dominated sport.”

WHAT: Ceremony from Mayor Toni Harp to honor New Haven, CT boxers with a Key to the City and special proclamations.

In addition to their success and dedication inside the ring, Dawson, Williams and Belenchia are active within the community and have stood out as exemplary role models. All three emerged victorious June 29 at Foxwoods Resort Casino, highlighting a sold-out event promoted by CES Boxing.

Rounding out the card, heavyweight Bob Weisen, of Pittsburgh, PA, will make his pro debut against Dennis Vance (1-0, 1 KO), of Detroit, MI. 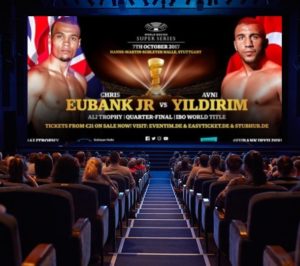