“We believe Santiago Dominguez has everything needed to be a champion,” RJJ Boxing CEO and co-founder Keith Veltre said. “He’s the highest ranked Mexican welterweight in the world, No. 20 by the World Boxing Council (WBC), and ready to move up to the next level. His opponent, Jose Rosario Cazarez, has won his last seven fights in a row. We’ll learn a lot more about Santiago in this well-matched fight. I think he’s going to be a key part of the future in a loaded welterweight division”

In what has become a standard for RJJ Boxing’s co-features on UFC FIGHT PASS, undefeated Luis “Koreano” Torres (9-0, 8 KOs) and Jose Luis Vasquez (10-1, 3 KOs) square-off in the 10-round co-featured event. Torres’ power and Vasquez’ boxing ability combine for what should be an entertaining stylistic match-up.

Undefeated Phoenix, AZ welterweight Jerome Jones, Jr. (4-0, 4 KOs), who finished off each of his opponents in the opening round, puts his perfect professional record intact against consummate Mexican boxer Mario “Cachalote” Israel Vera (6-1, 0 KOs) in a six-round match. Vera’s lone loss came in his last fight on short notice against 19-1 contender Hector Zepeda by way of a 10-round decision on March14. 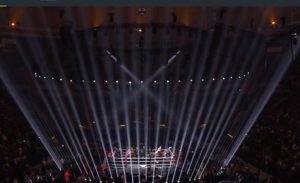