When Manny Pacquiao lost his WBO welterweight title to Jeff Horn in 2017, the consensus was “Manny Pacquiao is done at the elite level” and Jeff Horn losing that title in a one sided outing against Terrence Crawford in June of 2018 only enforced that opinion. A dominate seven round destruction of Lucas Matthysse in July of 2018 to claim the WBA regular welterweight title and fairly easy decision over Adrien Broner in early 2019 did little to change those opinions.

It is understandable considering Matthysse was past his best before vacating the 140 lb. division and Broner has the punch output of a sloth, neither gave Pacquiao much to worry about in terms of offensive retaliation. When the fight to face WBA Super World welterweight champion Keith Thurman was announced opinions were mixed on “Can Manny Pacquiao still perform against a younger, larger opponent at the elite level?”

In the build up to the fight Keith Thurman made a bold prediction “I am going to retire Manny Pacquiao” and despite fighting only once in twenty two months due to injury, there are some who believed that statement true. Those who did forgot to inform Manny Pacquiao because far as he was concerned “Retirement is for those over 65”  and when Thurman and Pacquiao met at MGM Grand, Grand Garden Arena he enforced his opinions on the topic.

The fight started fast as Manny Pacquiao came right at Thurman making a statement and gaining immediate respect by placing Thurman on the canvas in round one. The next five rounds would be all Manny Pacquiao while Keith Thurman appeared baffled on how he could adjust to nonstop pressure and movement of the 40yr old who Thurman claimed had “Tiny T-Rex arms” in pre-fight meetings. 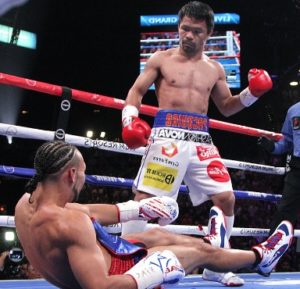 In the seventh through ninth rounds Pacquiao slowed his pace and it appeared Thurman might have adjusted as he started winning rounds but in round ten Pacquiao attacked Thurman like a shark that smelled blood. There was a slower Pacquiao in the eleventh and Thurman while not dominate as Pacquiao was in round ten did control the action. The fight would finish with Pacquiao answering everything Thurman threw and looked ready for another three rounds if need be when the final bell sounded.

When official scores were read Glen Feldman in his usual incompetent fashion scored it 114-113 for Keith Thurman while Judges Dave Moretti and Tim Cheatham 115-112 in favor of Manny Pacquiao who not only ended Keith Thurman’s four year title reign but took his coveted undefeated record.

With now  thirty three world title fights and wins over twenty one world champion Manny Pacquiao improved to 62-7-2 (39) while Keith Thurman after his first defeat now stands at 29-1 (22).

In the co-feature top ten ranked welterweight and former world title challenger Yordenis Ugas improved to 24-4 (11) after a dominate one sided victory over former WBC lightweight champion Omar Figueroa Jr. The fight was not competitive for a minute of any round and after dropping Figueroa Jr in the first it became a glorified sparring session for Ugas. The corner of Figueroa Jr failed him by not stopping the contest any time after round eight and because Ugas isn’t a big puncher they allowed him to take a sustained beating.

With his first loss Omar Figueroa Jr now stands at 28-1-1 (19). The future for Figueroa Jr remains unclear if he is going to regain past stature in the sport, he will need a top rated trainer because self-training is clearly not working as for Yordenis Ugas he is a legitimate threat for any top welterweight.

The third televised bout of the pay-per view even was between former IBF junior welterweight champion Sergey Lipinets and last minute replacement opponent Jayar Inson who filled in for the injured John Molina Jr.

The contest did little to help Lipinets climb the ratings due to a two round blow out over the over matched Jayar Inson. With the win Sergey Lipinets improves to 16-1 (12) while Jayar Inson drops to 18-3 (12).

In a bantamweight contest former WBC belt holder Luis Nery improved to 30-0 (24) after stopping former WBA and IBO title holder Juan Carlos Payano with a body shot at 1:43 of round nine.