Salita Promotions proudly announces the promotion of long-time associate and confidante David Berlin to the expanded official role of General Counsel and Consultant.

One of the most respected figures in the sport, Berlin has been a well-known New York City-based lawyer for over thirty years. He served as the Executive Director of the New York State Athletic Commission for two years, has represented a wide range of boxers, trainers, managers and promoters, has written about boxing legal issues for print and online publications and managed several fighters.

In 2016, Berlin was the recipient of the Boxing Writers Association of America’s James A. Farley Award for Honesty and Integrity. Berlin has also served for two decades on the board of The Dr. Theodore A. Atlas Foundation, a community service organization founded in 1997 by Teddy Atlas.

“As a boxing fan fortunate enough to have found my livelihood in the sport, I have had the chance to watch Salita Promotions grow over the years – from attending one of their early shows in Brighton Beach, later as the Executive Director of the commission overseeing their club shows in Brooklyn and Manhattan, and now as part of this great team putting on events that are reaching worldwide audiences,” said David Berlin. “Dmitriy Salita knows boxing, both inside and outside the ring. His proactive thinking, healthy ambition and love for the sport are the ingredients for his success. I am looking forward to working with a man I respect and admire, and to playing my part as Salita Promotions continues its growth worldwide.”

Set to return to putting on live shows this month after a pandemic-induced hiatus, Salita says the scope and depth of Berlin’s experience are invaluable to him in these challenging times.

“David Berlin’s vast experience in different facets of the boxing game is second to none,” said Salita. “He brings to Salita Promotions his unrivaled wealth of knowledge, experience and integrity. Our mission is to provide the best service to our boxers and the highest quality of fights to the boxing public. David will play a pivotal behind-the-scenes role as we prepare for events that are vital to growing our company to new heights.”

EXCLUSIVE: Inoue Discusses His WBSS Fights & Looks to the Future 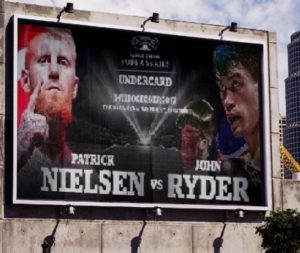