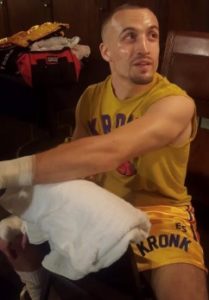 Bonas will have his debut fight under the Salita Promotions banner on Saturday, October 5, on the undercard of the Claressa Shields vs. Ivana Habazin battle for the vacant WBO Junior Middleweight Championship at the Dort Federal Event Center in Flint, Mich.

The popular 25-year-old Bonas (3-0-1, 2 KOs) is one of the last of the young fighters trained by the late, great Emanuel Steward, who considered him a prodigy.

Under Steward’s guidance, Bonas was National Ringside Champion and went 45-5 as an amateur while training with many of Steward’s top fighters. Bonas spent numerous camps with Wladimir Klitschko and was one of main sparring partners for Miguel Cotto when he regained his world title. He is now trained by Steward’s nephew, Javan Sugarhill Steward, at the new Kronk Gym.

“Words can’t describe how glad I am to be signed to Salita. I’ve wanted this my whole life. I sleep so well now. I’m in such a blessed place in my life right now,” said Bonas. “I feel like I signed with the right person to give me the best future. I’m ready to go.”

Bonas turned professional in 2012 and had three quick fights before legal troubles sidelined his career and saw him have only one more fight, a two-round victory in 2017.

“It’s a part of my life I learned a lot from,” said Bonas of his incarceration. “People always say they regret going to prison. I don’t regret it because it showed me a lot. I experienced so much and was exposed to so many different personalities and cultures. Being there made me a better man today and I don’t regret going. I have no problem sharing my past with people. I know where I’m at in life now, mentally, because of how much I grew up in prison.”

Quick and strong with high ring intelligence and a strong fighting heart, Bonas is a beloved figure in the Romanian community of Detroit, and they flock to his fights en masse.

“Emanuel taught me the real basics of boxing and I learned a lot about determination and dedication from Emanuel – a lot about respect,” continued Bonas. “And now Javan is like a family member to me. I love him. I trust him wholeheartedly. I am blessed to have him on my team.”

“I’ve known Jacob since he was 10. I used to go after school and help him with his homework and stuff like that,” recounted SugarHill Steward. “He and his (twin) brother (also undefeated Joseph) caught on very fast and became instant stars in the gym. They were beating up everybody, but he’s been in and out of trouble previously in his life. Now it’s all behind him and he’s back training and preparing for his return.”

Steward said it took a few weeks for Bonas to sharpen back up, but he’s still got the wealth of natural fighting gifts that had his Uncle Emanuel convinced he was a future champion.

“He still has it, we had to sharpen him back up,” said Steward. “He’s back in shape and motivated knowing he’s fighting. I’ve seen a change in him since he came back and started preparing for a fight. It gives him some direction. I feel very positive about this. Dmitriy has been doing a lot in boxing and he’s part of the Kronk family as well, so this is good for everyone involved.”

“As one of Emanuel Steward’s last young fighters now training with Javan SugarHill Steward, Jacob Bonas is connecting the rich history of Kronk to the future,” said Dmitriy Salita. “He has all the skills inside the ring to reach boxing’s heights and add another world title to Kronk Gym’s legacy.”