Joe DeGuardia’s Star Boxing is excited to announce the return of the critically acclaimed “Rockin’ Fights” series on FEBRUARY 28, 2020, live, from The Paramount, in Huntington Long Island. The intimate venue makes it feel as if you are in the ring no matter where your seats are located. The “Rockin’ Fights” series has a history of bringing extremely action packed fights to Long Island, and the 38th edition of the fantastic fight series will be no different.

Star Boxing has also brought in talent from all over the world to the Paramount including two-time world champion Demetrius “Boo Boo” Andrade (Rhode Island), and former world champion, Joshua Clottey (Ghana, Africa).

Rockin’ Fights at The Paramount has continuously sold out (this is Star Boxing’s 38th show there) with a Long Island crowd that fills the venue with unrivaled energy. The series has even brought out the likes of celebrities such as actor Burt Young, famously known for his role in Rocky and hip-hop artist and actor LL Cool J, amongst many others.

The Rockin’ Fights series at The Paramount offers an affordable and extremely entertaining night out, that is guaranteed to see action packed professional fighting from the opening bout, through the main event.

On February 28, 2020, Star Boxing plans to make the 38th edition of “Rockin’ Fights” yet another thrilling night of entertainment. 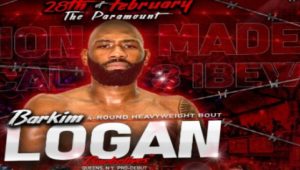