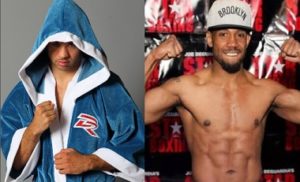 Perennial Jr. Middleweight contender Delvin Rodriguez, (29-8-4, 16KO’s) Danbury, CT takes on upset minded Courtney Pennington, (10-4-1, 5KO’s) in a 10 round Jr. Middleweight matchup on Thursday, May 11th, at The Mohegan Sun Arena.  Pennington earned the right to fight Rodriguez by securing two huge back to back upset victories over highly regarded favorites. The event, part of the exciting “Slugfest at the Sun”  promises to be another action-packed lineup of professional boxing promoted by Joe DeGuardia’s Star Boxing

Delvin has fought many elite fighters in his career including world champions Miguel Cotto, Erislandy Lara, and Austin Trout.  Delvin is hoping for one more shot at the world title and the glory it brings.  This will be Delvin’s 8th appearance at the Mohegan Sun Arena. The popular Jr. Middleweight is coming off a hard fought 10 round decision victory over Shawn Cameron which also took place at the Mohegan Sun on July 23rd of last year.  Delvin has a large following in the area since he thrills fans with exciting brawls.
Pennington is coming off two big upset victories and is looking to make Rodriguez his third straight victim.  Courtney stopped former amateur standout Boyd Melson who carried a mark of (15-1, 1KO) going into the match on November 19th of last year.  After defeating Melson, Pennington traveled to the hometown of favored Khiary Gray Pitts (who was 14-2, 11 KO’s going into the fight) on February 4th, 2017 and came away with a unanimous decision victory dropping Pitts twice on the way to victory.  Pennington knows Rodriguez will be the toughest and most experienced opponent he has faced in his career but is confident of victory.
The two fighters had these comments about their upcoming fight “I’m happy to be fighting at The Sun again” said Rodriguez.  “I know Pennington is a young, hungry lion but I will be ready as I always am for anything he brings”.
“Delvin Rodriguez has been in the ring with many great fighters and always comes to fight” said Pennington.  “This is the biggest fight of my career and I’m very confident I can come away with a victory”.
Promoter Joe DeGuardia had this to say about the main event “Once again Delvin steps into the ring at the Mohegan Sun against a very dangerous opponent who is coming off two huge upset wins and looks to make Delvin the 3rd.  I’m looking forward to another exciting evening of fights at the Mohegan Sun.  It should be interesting to see who comes out on top in this fight between the grizzled veteran and the young upstart”.