The eight heavyweight fighters who will go head to head in Ultimate Boxxer 6 on Friday, December 13 have now been confirmed. The event takes place from Manchester and will be live on BT Sport 1, BoxNation and BT Sport Youtube.

Ultimate Boxxer returns to Manchester for the first time since the explosive cruiserweight tournament that saw the Sauerland’s Mikael Lawal reign surpreme, before Olympian Steven Donnelly wowed the fans by powering his way to victory at UB5 at the O2 in September.

Now attention turns to the most coveted division of them all.
Nick Webb, Sean Turner, Mark Bennett, Jonathan Palata, Josh Sandland, Jay McFarlane, Kamil Sokolowski and Chris Healey will all arrive on December 13 with huge confidence to take home the money and the golden robe.

‘The heavyweight division is absolutely thriving right now and we are very excited to put on this monster event and add to a huge December calendar for heavyweight fight fans,’ said Ultimate Boxxer founder Ben Shalom.

The Scott Welch-managed contender Nick ‘Wild’ Webb (13-2) enters UB6 with an impressive professional record, with 11 wins coming by way of KO against opponents such as Ferenc Zsalek and Chris Healey. He has been frustrated by title fights with Daniel Dubois and Nathan Gorman falling through in the past, and will be hoping to put his only defeats to date against Dave Allen and Sokolowski (who also joins the tournament) firmly behind him.

Sean ‘Big Sexy’ Turner (12-3) followed the example set by Ultimate Boxxer 5 champion Steven Donnelly and went about guaranteeing his spot on the UB6 card by hammering the social media team across Instagram and Twitter. The monster Irishman has had an impressive amateur career with 120 amateur fights, winning 90 contests. He held multiple junior titles and boxed Anthony Joshua twice, losing both on points. After defeats to Filip Hrgovic and Nathan Gorman in his last two outings, the Peter Taylor-trained Dubliner will be out to prove he’s back on the right path to heavyweight glory at UB6.

Former army man Mark ‘Bad News’ Bennett (5-0) toured Afghanistan before a serious injury culminated in a medical discharge. He took up boxing as a 27-year-old, and has never looked back. He hasn’t lost a bout in either the unlicensed scene or amongst the professional ranks. Bennett, who is relatively unknown could come into this as a dark horse having already beaten Ferenc Zsalek and ABA finalist Chris Healey in his professional career.

Frank Warren-fighter Jonathan ‘God Speed’ Palata (7-0) enters the fray at UB6 with an impressive and unbeaten professional record, following a stellar amateur career which saw him rack up an ABA Novice Championship, London ABA Championship and he also won the prestigious Haringey Box Cup. He fights out of the famous Peacock Gym in Canning Town.

For former professional rugby league player Josh Sandland (4-1-1).
Ultimate Boxxer represents another chance to succeed in top-level sport, having played for Huddersfield Giants and Wakefield Wildcats. He triumphed over Jay McFarlane earlier this year and showed he was dangerous. His only defeat came to Tom Little two years ago when he had just joined the professional ranks.

Glasgow hard man Jay ‘Ghost’ McFarlane (10-4) arrives on the UB6 scene as the youngest fighter in the tournament at just 21. He spent some time in a Caribbean orphanage as a youngster, and has dived into 14 professional fights already in his career. He fought at Madison Square Garden against Matt McKinney in March 2018, and dropped to 14 stone 4lbs to fight for the Scottish Cruiserweight title, which he won against Ratu Latianara in June of last year.

A former Muay-Thai champion, Polish-born Kamil Sokolowski (7-15-2) won only two of his first 13 fights, with defeats coming against the likes of Dillian Whyte, Kash Ali and Gary Cornish. Starting out as a journeymen, he has since refocused his efforts, and has improved dramatically under the watchful eye of Gavin Lane at the Barum Boxing Club in Barnstaple. Only Whyte and Nathan Gorman have stopped him in his career. Tipped as a dangerous darkhorse.

Representing Manchester on this heavyweight show is ABC southpaw Chris Healey (8-6) who has been dogged by injury after winning six of his first seven professional fights, but the 31-year-old is keen to show he’s back to his best after major back surgery, and the loss of his father in 2016. His last two defeats have been against fellow UB6 contenders Mark Bennett and Jonathan Palata. 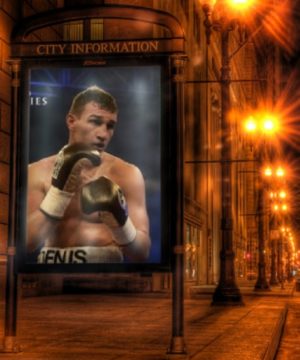