Oxnard, CA:           Sergey “Krusher” Kovalev (30-1-1, 26 KOs) has an entirely new training philosophy as he prepares for his highly-anticipated rematch with Andre “S.O.G.” Ward (31-0, 15 KOs) on June 17 live on HBO Pay Per View® at the Mandalay Bay Events Center in Las Vegas, Nevada. He has fired his strength and conditioning coach and has vowed not to make the same mistakes this time around. His new coach, Aleksandr Mikhailovich, has a new philosophy centered around his prior experience working with biathletes.
Kovalev, the 33-year old from Chelyabinsk, Russia, believes he over-trained for his first fight with Ward and, as a result, when he failed to knockout Ward in the early in the bout, the Krusher ran out of steam in the championship rounds. Describing his training regimen for the first fight, he said, “I ran a lot. I did a lot of workouts. I did three workouts a day. I over-trained because I did a lot. I had a conditioning coach and he was scared to say something to me. I don’t know why. He thought if he said to me I would dispute his comment or not pay him money. He is crazy. I was confused myself. I worked with him for the rematch with Jean Pascal. After these next two fights, he killed me: Chilemba and Ward. I said to him bye-bye.”
For the rematch, Kovalev has a brand-new strength and training philosophy that allows him to get the most out of his workouts. Krusher explained, “I do less workout this time to save energy. I spent a lot of energy and a lot of power in my last training camp and I was empty already one month before the fight. I never fought ten rounds of sparring for the last fight of training camp. I maximum, one time, I sparred eight rounds. Already, yesterday, I spar ten rounds. I feel tired but I feel much better than last training camp.”
“I said before my last fight with Andre Ward that I should to get more work, more training and I did it,” said Kovalev. But he realizes now this hurt him in the long run. He continued, “I understand that I made my mistake, big mistake. It’s good experience for me too. But right now, I just try to get back all my training camp experience what I did before the fight with Chilemba. Because Chilemba fight and Andre Ward is the worst two, similar shape. I fought very bad. I looked very tired in both of these fights. Right now, delete this and get back what I did before these two fights and I hope it will bring success June 17.”
His long-time trainer, John David Jackson, had this to say about Kovalev’s conditioning for the rematch: “I noticed that this time around his conditioning coach was a bit different. He has him resting more. The other coach had him doing a lot of things that to me were unnecessary. I don’t get in the way of the conditioning coach’s job and I’m not doing that with this guy, but he seemed more interested in keeping Sergey a little more relaxed and not over-training.” 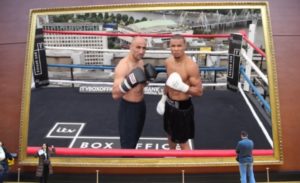