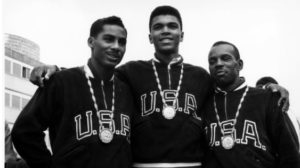 ALGIERI ROCKS THE HOUSE IN RETURN TO THE PARAMOUNT