How do you prepare for the fight against Huck?

“We try to understand what we need in that fight in order to win. We practise some things and we watch videos of Huck’s fights. It will for sure be a good fight for the fans. Huck has defended his title 13 times, ‘Sasha’ is a world champion.

We know that Huck never gives up, he always moves forward and tries to win. We will not underestimate Huck!”

Your fighter is seen as the favourite to win The Muhammad Ali Trophy. Do you agree?

But if you don’t believe in victory there is no sense taking part in the World Boxing Super Series. ‘Sasha’ wants to have all the four belts in the cruiserweight division and he wants the Muhammad Ali Trophy. There will be one guy with everything by the end of the tournament and ‘Sasha’ wants to be that guy.”

How is it to train Usyk?

“‘Sasha’ is very smart, he understands what he needs. He trains heard, he listens, he likes to learn. He trains hard in every camp and he tries to grow from fight to fight. If he gets the victory against Huck, we will concentrate on the next fight.”

Smith: I am expecting a tough night in Nuremberg 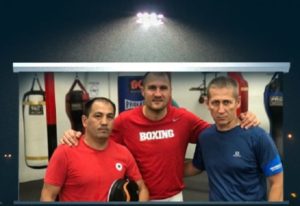