WBA #15 Heavyweight Ivan Dychko Ready and Willing to Settle Score with Anthony Joshua on June 1: You Didn’t Really Beat me in the Olympics, and You Still Can’t Beat me as a Pro

28-year-old Dychko (7-0, 7 KOs), a two-time Olympic super-heavyweight bronze medallist, has contentious history with the current WBA Champion Joshua. The 6′ 9″ Kazakhstani lost a controversial decision (13-11) to him in the semi-finals of the 2012 Summer Olympics in Joshua’s homeland of England.

For example: “Joshua defeated Kazakhstan’s Ivan Dychko by a 13-11 score. The scoring for the fight was very odd with the judges scoring both the 1st and 2nd rounds even despite Dychko clearly getting the better of the slow-moving arm-punching Joshua.”

Dychko’s professional career has been dedicated to getting his revenge.

“He knows he didn’t beat me then and he still can’t beat me,” said a fired-up Dychko. “He got a hometown decision and ended up ‘winning’ my gold medal. Now is his chance to prove he deserved his success instead of it being handed to him. I’m here in great shape and ready to go.”

Dychko, who went 181-18 as an amateur, says he doesn’t need 20 professional fights to be ready for Joshua.

“He’s the same fighter he always was,” said Dychko. “He gets his world rocked in every fight and then his little bit of power bails him out when his opponents get tired. I know exactly how to beat him. I already did.”

Dychko says he’s ready and waiting for his phone to ring.

“No disrespect to Big Baby. If he ends up fighting, I am happy for him, but if Anthony Joshua needs an opponent for June 1, I am the one who deserves this. I’ll be waiting to hear from your people, Anthony.” 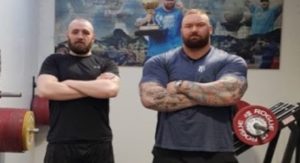