The night’s headliner would be between IBF super lightweight champion Ivan Baranchyk and WBC silver belt holder Josh Taylor. It was a tough fight with classic boxer versus slugger type style contrast, Taylor and his foot movement was able to keep Baranchyk behind a step for most of the fight and force him to miss a majority of his power punches.

There would be two knockdowns scored by Taylor in round six but Baranchyk like a true champion would get back up to continue fighting.

The later rounds showed Taylor slow slightly allowing Baranchyk to mount a slight comeback and even finish the 12th and final round pressing the action. When the final scores were read 117-109 and 115-111 twice, my own scorecard would read the same as 115-112.

With now both the IBF and WBC Silver 140 lb championships, Josh Taylor improved to 15-0 (12) while Ivan Baranchyk after suffering his first loss stands at 19-1 (12). The Super Lightweight finals will pit Josh Taylor against WBA Super and WBC Diamond champion Regis Prograis, the winner of that bout will not only be the “World Boxing Super Series” season two 140 lb champion but Ring Magazine division champion as well.

When Inoue and Rodriguez stepped into the ring, it appeared as though Rodriguez had more than just a one inch height advantage in fact he looked a division larger than Inoue.

The first round was close, Rodriguez pushed the action hoping to capitalize on his physical size advantage and edged the round. The second started with Inoue stepping back as Rodriguez moved in, a thunderous left hook would drop Rodriguez for the first time in his career. 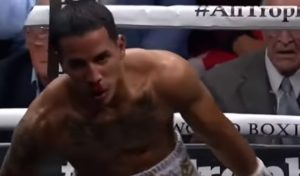 Once up Rodriguez attempted to box for the outside, Inoue then was the fighter pressing the action and moved in with another huge hook this time it landed on the body of Rodriguez. Once down Rodriguez looked towards his corner shook his head no as if he was not OK, like a champion Rodriguez did climb off the canvas but his legs were shaky, nose bloody and gave the referee no indication he wanted to continue.

The fight would be waved off and Naoya Inoue claimed his fourth world title in three divisions along with boxing’s most valuable championship “The Ring Magazine” lineal title. With the win Naoya Inoue improved to 18-0 (16), this would be the first defeat in Emmanuel Rodriguez career he now stands at 19-1 (12).

The next stop for Naoya Inoue is the “World Boxing Super Series Finals” where he will face WBA Super and WBC Diamond champion Nonito Donaire to see who claims the “Muhammad Ali Trophy”.