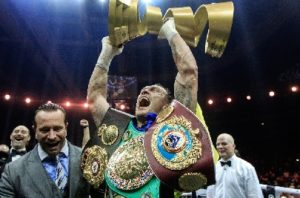 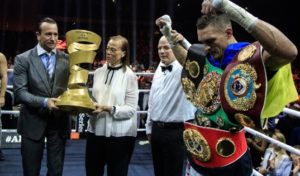 Ukrainian Aleksandr Usyk made history by beating Russian rival Murat Gassiev by a unanimous decision to become the first man to hold the Muhammad Ali Trophy and all four world cruiserweight titles.

The pair went the distance in front of 24,000 spectators at the Olimpiyskiy Sports Complex in, Moscow but it was Usyk who had the edge.

Gassiev landed some heavy body shots in the beginning but started to tire and the Ukrainian was by far the most dominant in the later rounds.

Usyk promised before Saturday’s final ‘a beautiful fight’ and for Usyk, it was indeed a showcase of skills with the victory establishing him among the best fighters in the world.

“Usyk fought an amazing fight and I think that Usyk today is the best pound for pound boxer in the world and a worthy winner of the Muhammad Ali Trophy,” said Kalle Sauerland, Comosa’s Chief Boxing Officer.

“Moscow, 2018. Bang! Daddy’s in the building,” said an ecstatic Usyk after the fight.

“To win all four belts and the Muhammad Ali Trophy is a dream coming true. It is no secret that Muhammad Ali is my biggest idol so this is a great honour,” said Usyk after the fight.

“I’m not a superstar, stars are in the sky. Just an ordinary guy, who is doing something well.”

“My team made me look like I looked in the ring. This is our victory. I will keep this trophy at a special place in my home because my beloved wife, Katarina, has already prepared a special place for it.”

Usyk and Gassiev embraced warmly after the fight with broad smiles on their faces.
“I had the best opponent in my professional career,” said Gassiev.

“I did my best, but today it was Aleksandr’s day. Aleksandr was the favorite, and he proved it. This was a very good experience for me.”

Lonnie Ali, the wife of the late heavyweight icon Muhammad Ali, was guest of honour while watching Usyk-Gassiev live at the Olimpiyskiy Sports Complex and after the fight, she revealed and awarded the winner with the Muhammad Ali Trophy, The Greatest Prize in Boxing. 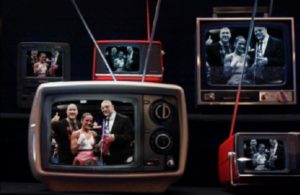