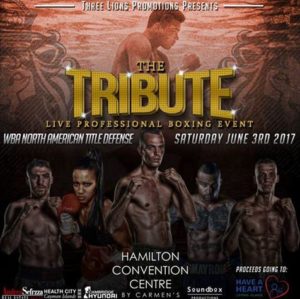 In the Main Event of the Three Lions Card in Tribute of Muhammad Ali, and George Chuvalo, with Chuvalo sitting at Ringside, inside the Hamilton Convention Centre, in Ontario, Canada, Saturday night…Home-Town Hamilton Boxer, Steven “The Piranha” Wilcox (17-2- 1) retained his WBA-NABA Super Lightweight Championship, in front of a jam packed and sold out audience, by way of unanimous decision over Oscar Arjona (13 – 6) of Mexico. Official scores were 100-88 on all three scorecards. Wilcox also avenged a controversial decision loss to Arjona, with the dominant shut-out victory.

In the Co-Main Event, Kevin Higson (11 – 1) of Hamilton, Ontario was victorious in his attempt to avenge the only blemish on his professional record, with a split decision over Mexico City’s, Martin Islas (11 -3). Official scores of the bout were 77-75 twice in favour of Higson, and 77-75 once in favor of Islas.

Also on the card, Mladen “Monster Mel” Miljas of Mississauga, Ontario (5 – 0, 5KO’s) kept his knock-out streak intact and rolling, at 5 in a row to start his professional boxing career, with a T.K.O victory over Carlos Carreon (4 – 3) of Guadalajara, Mexico.

Orangeville, Ontario native “Buzz” Grant (11 – 4) who now resides in Hamilton, was near perfect in his unanimous decision win over Isidro Taola (10-6-1) of Mexico. The official scorecards after the contest read, 60-54 twice and 59-55 once.

And in the evening’s opening contest, in a battle of unbeaten Boxers, Mayron “The Brazilian Bomber” Zeferino (4 -0) of Toronto, Ontario, was just way too much for Abraham Juarez (4 -1) of Mexico. True to his name, Zeferino bombed away on Juarez in the second round, and with a flurry that followed a knockdown, the ref. was forced to stop the fight, and award the T.K.O. to the Toronto based Boxer Zeferino. 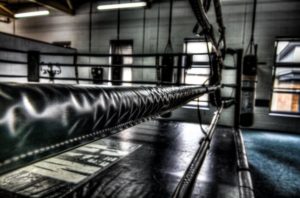