The wait is finally over ladies and gentlemen for the biggest fight of the year so far. This is the first time in history that Britain have hosted a heavyweight unification flight on these shores. Here is my breakdown and prediction on IBF, WBA & IBO champion Anthony Joshua (20-0, 20KOs) verses WBO holder Joseph Parker (24-0, 18KOs)

The world heavyweight showdown has every ingredient needed to be remembered as one of the greats. Not only do we have 4 different versions of the world title on the line but it means we edge closer to one ultimate heavyweight champion.

You only need to look at their collective professional records of 44 wins, no losses and 38 knockouts to know this really is a close contest. Both fighters are young and still have plenty of miles left on the clock.

There has not been any trash talk between the fighters, in fact it’s been the complete opposite. We just have two confident fellers that have a lot of respect for each other and believe in their own abilities. If you wanted to find a bit of needle then you could pull on the rivalry between the north and south hemisphere. Granted it’s more associated to the rugby than boxing but a rivalry nonetheless.

British and world No.1 Anthony Joshua has had 20 fights with 20 knockouts and fought 65 rounds. The Londoner has an excellent combined opponent record of 484-137-11.

The Olympic gold medalist made his debut just over 4-years ago and flattened the undefeated Emanuele Leo in the first round. It’s quite remarkable what the Londoner has achieved in just a short space of time.

At 6-0 the 28-year-old took only two rounds to dispatch British veteran Matt Skelton before getting rid of Denis Bakhtov within the same distance of a scheduled 10.

Victories over British fighters Michael Sprott and Gary Cornish plus American Kevin Johnson followed. The first real test for the Watford boy was against old foe Dillian Whyte for the British and commonwealth titles. After being wobbled Joshua regrouped and knocked out Whyte with a thunderous uppercut, in a real British tear-up that got my vote for domestic fight of the year 2015.

The Londoner then became the IBF champion of the world when he knocked out undefeated American Charles Martin. After two further defences against another unbeaten American Dominic Breazeale and Eric Molina the fight against Wladimir Klitschko was scheduled.

With the IBF, IBO and WBA titles all on the line, AJ knocked out ‘Dr Steelhammer’ in round eleven after being floored in the sixth to become the unified world champion in front of 90,000 spectators at Wembley Stadium.

Carlos Takam was a durable late replacement in Joshua’s last fight due to mandatory challenger Kubrat Pulev pulling out through injury. AJ won comfortably by stoppage but was criticised for a less then stellar performance.

The New Zealander turned pro in 2012 and raced into a 5-0 record before he faced his first real challenge against South African Frans Botha who he knocked out in two.

Brian Minto became another victim in Parker’s eighth fight before wins over Sherman Williams and Jason Pettanay put him at 12-0.

It was 2016 when Joseph stamped his authority onto the heavyweight scene when he defeated Carlos Takam by unanimous decision.

A second round knockout victory over Alexander Dimitrenko once again showed that Parker has power but his controversial victory over Mexican Andy Ruiz Jr showed a few chincks in the armour. It was this majority decision that earned Parker the WBO strap.

In the Vegas-based fighters last appearance he put on a less then impressive display against Brit Hughie Fury. In a drab affair which was more down to Fury’s awkward style Parker retained his title for the second time on points.

Both fighters have been tested and matched up well but their is no doubt that Joshua has gained the most valuable experience so far.

Standing at 6’6” with a 82” reach AJ has the height and reach advantage on Parker and he will impose that huge frame upon his opponent.

There will be questions asked of Joshua’s stamina and chin. Will AJ empty the gas tank and leave himself vunrable in the later rounds? Will a big shot unsettle and wobble the big Londoner, it is all very possible. But getting knocked down by a Klitschko right hand does not make him chinny.

The early tactics for Joshua should be to work behind that jab in the early exchanges. Parker does have a tendency to drop his left hand which leaves him exposed to an over hand right. Although he does have speed and good accuracy Parker flicks his jab to measure up for a big right hand. Joshua on the other hand can take the centre of the ring by countering and imposing his excellent strong jab.

If AJ can push his opponent back onto the ropes and cut the ring off then Parker will be bang in trouble. Whether it’s one big shot that rocks Parker or a combination of shots, Joshua will eventually get to him.

When big Josh finally does catch Parker his instinct will be to fight fire with fire rather than tie up his man. I can then see AJ finding a bit of space on the inside and detonating his trademark uppercut which Parker is susceptible to.

Trainer Kevin Barry has been vocal about Parker’s granite chin but withstanding a Joshua combination is a different kettle of fish.

Joshua may need to tap into that valuable experience he gained against Klitschko if he finds himself in a spot of bother. We won’t know if Parker can shut out the crowd and stand up to the relentless pressure that he will inevitably endure until fight night.

I think we will see a lighter, faster and more improved Joshua which sounds like a recipe for disaster for team Parker.

Both fighters have their flaws but both will have improved from their last fights and they will improve again after this one. I think Anthony Joshua will win but it won’t be plain sailing. As long as Joshua doesn’t overlook his opponent, which I don’t think he will then I expect a stoppage between rounds 6 to 9.

In hindsight we can all breakdown the fight and give good valid reasons but when it comes to the heavyweight game everything can change in a instant. As Joe Louis once said: “Everyone has a plan until they’ve been hit.”

Good luck to both and defeat will not be the end of the world, it will be just one bad night on the record. 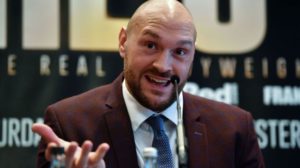