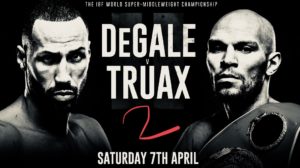 DeGale’s home coming ended in disaster last year when he lost by a majority decision against the unfancied challenger from Minnesota. It was a closely fought contest but Truax just edged it for me by staying on the front foot throughout most of the fight.

The 32-year-old Londoner lost the fight due to an accumulation of factors, like overlooking his opponent which he will openly admit himself. The eleven month lay-off following a hard fought draw against Badou Jack clearly made him a bit ring rusty plus an operation on his damaged right shoulder in June were all factors that resulted in his second professional  loss.

To his credit ‘Chunky’ has not used any excuses for his defeat just that he may have been guilty of looking beyond his opponent in the first fight which is something he has not done in the lead up to their rematch.

The IBF super-middleweight champion is ranked at No.2 in the US and No.8 in the world. After 34 fights he has accumulated 215 rounds with a 53% knockout ratio and a combined opponent record of 614-225-35.

‘Golden’ as Caleb likes to be known has not got any big name victories on his record other than his recent win over James DeGale. Every time the 34-year-old stepped up in class he was always been soundly beaten which makes his win last year such a shock. A unanimous decision loss against Jermain Taylor and TKO defeats to Daniel Jacobs in the twelfth and Anthony Dirrell in the first round shows he is no world beater.

The Olympic gold medallist on the other hand has not only been in the ring with some of the best super-middleweights in the world but he has produced the goods and came out victorious. Notable names like Paul Smith, Piotr Wilczewski, Lucian Bute and Anthony Dirrell have all fallen short against DeGale. In fact, it was the triumph against Dirrell that crowned Chunky the IBF super-middleweight champion.

After two defences he attempted to unify against Badou Jack but after a great start in which he dropped the WBC champ in the first round his Swedish opponent almost stopped the Brit in the final round in one of the fights of 2017.

James DeGale was considered to be the main man in the super-middleweight division this time last year but his loss against Truax has seen him take a nose dive down to No.4 in the UK and No.12 in the world rankings.

In the first fight DeGale surrendered the centre of the ring far too many times and continued to back up onto ropes which allowed Truax to connect with shots at will.

DeGale is comfortable on the ropes but rather than sustain unnecessary damage like he did in the last meeting he needs to go back to what he has done before which is side step his opponent and put them under pressure. He can use this same tactic again against Truax as he does have the tendency to walk in straight lines which is perfect for chunky as long as he keeps moving.

If DeGale can use his right hand jab more effectively while throwing his left down the pipe then he can also stop Truax from coming forward.

The Brit is a southpaw but is also a great switch-hitter and he uses this tactic to confuse his opponents. As we saw in the last round of their in their previous bout the southpaw stance is the most efficient way to beat the American. Head movement will also need to improve rather than just dipping his head as Truax will continue to nail DeGale.

If the Hammersmith boy can correct his mistakes then he should regain his title. My only question is how much of the old DeGale is left? I don’t think Truax will improve or be able to change his approach so a vintage performance is needed by the former champion.

After hearing the disappointed and almost embarrassed sound of DeGale’s voice this week I think we will see not only see a better performance but a slick and dominant display from the Londoner. James DeGale to win by stoppage in the middle-late rounds. 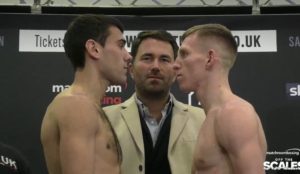 The ‘Big Cheese’ of Europe?