It’s been just over 2-weeks since Tommy Langford (20-3, 6KOs) lost a second close decision against Jason Welborn (26-4, 7KOs) for the British Middleweight title in Birmingham.

After the first fight in Walsall Town Hall was nominated as one of the Contest’s of the Year in the BBBofC 2018 awards, the second instalment of the ‘Battle of the Baggies’ will surely be back on the shortlist for 2019.

With all the plaudits both fights have been given it’s been a hard one take for the the 29-year-old that was named the ‘Baggies Bomber’ by his own West Brom fans.

“I wouldn’t say I was robbed or anything like that, but I do feel that I’ve been hard done by with the scoring twice”, said Langford.

“I felt like I’ve won them both especially the second one, my boxing was a lot better in the second fight and I felt like the rounds that I wasn’t dropped in I dominated throughout.”

On the Billy C Show we have discussed the 2-point swing when a fighter is dropped even though they are winning a round comfortably. In the case of the second encounter between Langford and Welborn, the Birmingham-based fighter was in control of the first round until he was caught cold with a right hand with thirty seconds to go. We asked Langford if the round should have been scored a 10-9, rather than the normal 10-8, which could have made the difference between winning and losing.

“They’re what they are, they’re two-point rounds but apart from those rounds I’d give Welborn the twelfth round, maybe?

“I understand what you’re saying but I don’t think that’s the thing. If the judges are scoring the rounds independently from the last round it shouldn’t matter if someone gets knocked down. But if you’re watching the next round with preconceived ideas then it does sway your scoring. I think that’s the problem we have sometimes.”

After what looked like a heavy knockdown in the third Langford showed great character and courage to last the distance and dominate the fight. How did you feel coming out for the fourth?

“Literally fine, my head was clear. I knew after the knock down he was going to come on strong, so it was a case of you’ve got to hold on to survive the round. I didn’t really feel rocked and my head was clear. In the corner I knew what I had to do and that was go out and win the fourth round which I think I did and won it well.

“It’s nice to get compliments but I didn’t feel wobbled or that my head was in a different place. I felt like I knew where I was and in complete control of what I had to do. I was able to deliver it and that was the important thing.

“I went right back to the corner and Tom [Chaney] gave me the advice that was needed, I went out there and delivered it in the next round. If you’re not clear minded that’s going to show, you’re going to be ropy in the next round.”

Tommy’s ability to recover so quickly shows he’s high level of fitness but as the fight wore on was Welborn’s power diminishing or was Langford’s punch resistance stronger?

“That’s a strange thing as well, whether his power faded because he was blowing, or I got more used to it. My fitness has never been bought into question, everyone knows me as an extremely fit kid and I’ve been able to churn out round after round and put in big punch outputs, that’s never been an issue to me which is a great thing to have.

“Those two punches that knocked me down never bothered me, I didn’t feel gone from them so there’s something there that we got to look at. I don’t ever get rocked in sparring. I know we wear big gloves and head-guards, but I’ve been sparring big guys who are hitting hard, like Callum Smith. I’ve been one of his sparring partners for years and I’ve not been rocked or hurt during those spars. My legs have never gone or anything like that, so you think, why’s that as I’m sparring heavier?

“Personally, I think the weight is something we need to look at. I’m a big, big middleweight and I have been for a long time so maybe stripping muscle away from certain areas, like my legs is playing it’s part now, so I may need to build up again and look at super-middleweight.”

Since the narrow defeat to Welborn you’ve had the chance to reflect and watch the fight back how would you rate your performance?

“Apart from the twelfth I can’t find another round to give him. Personally, I felt like I boxed very well and it’s hard to find yourself in a position where you’ve boxed well but you’ve ended up losing by such a narrow decision. I don’t feel like a beaten fighter. I’ve came out with very mixed emotions because I’ve been in a great fight, I’ve fought a great fight and I’ve performed so in my head, I feel like you’ve won.

“I suppose it’s the nature of the sport where in and it’s just part and parcel of boxing and you’ve got to deal with it. Losing is one thing but when you lose it and you don’t feel like you’ve lost it, it’s hard.”

You’ve been in a contender for fight of the year in 2018 and no doubt the second fight will be nominated for 2019 so would you be interested in doing a trilogy?

“Would I have the third fight, yes but its got to be financially viable and at the same time he can look at it and say, I’ve got two wins why do I want to go and fight him again? No matter what he hears off people like – you never won that and you was lucky, which you do get as a boxer – he can tell them he got the decision. So unless he has a point to prove to himself there’s no need for him to do the third. Would I take it yes but will it happen, probably not.”

Many boxers across the country could only dream of the support Langford’s football club West Bromwich Albion give him. We asked the die-hard Baggie fan how proud he is to have that support?

“The fans are wicked you know. The people that come and support me from West Brom are brilliant and it’s great to have that support from the club itself as well. It’s a big thing and it’s helped my career.”

What’s your next route and where do you see yourself in 2020?

“The initial thought is to move up and look at avenues at super-middle. The loss is still very fresh in my mind but we haven’t really looked at what there is or know too much about what route to go down, but I think that’s the initial thought.

“By 2020, holding a title of some sort and still banging away. But I really want to be in some exciting fights and that’s what I want my career is remembered for.”

The TalkinBoxing with Billy C TV & Radio Show would like to thank Tommy for taking the time out for an interview. We wish you the best of luck and hope your back in the ring as planned by December. 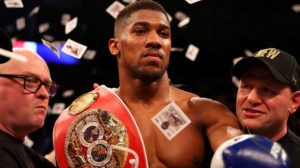