After surrendering any chance of winning the WBO featherweight title on the scales Scott Quigg (34-2-2, 25KOs) managed to restore a bit of credibility in his defeat to Óscar Valdez (24-0, 19KOs).

The 29-year old came in a disappointing 2.8lbs over weight when he hit the scales 24 hours before his scheduled bout which was totally disrespectful to his opponent and very unprofessional.

With that being said it was very uncharacteristic of Quigg who has been a credit to the sport and has always carried himself in a professional manor throughout his whole career so far. I have followed the Bury lad for a large chunk of his career and I can categorically say that this has never happened before.

The excuse was that he had a fractured foot so he was unable to do as much road work as he would have liked in the lead up to the fight.

Huge credit has to go to Óscar Valdez for still taking the fight even though his team where advising him not to. Not only did the Mexican put in a dominant display and fully deserve his victory but he also pushed through the pain barrier with a broken jaw.

All three judges scored in favour of Valdez with two scoring the same 117-111 and the other 118-110. Although you can not argue the result or the scorecards it doesn’t quite reflect how the fight went as a whole. There were a lot of close rounds in an action packed fight that both fighters should take a lot of credit for.

The 27-year old Mexican has now established himself as one of the leading men in the featherweight division. Let’s hope he can recover quick enough to fight again this year as I will certainly look forward to seeing him in action again.

So what is the next step for Scott Quigg? There is no doubt he hasn’t damaged his career too much after a solid performance in his defeat. With the featherweight division littered with talent there are still plenty of possibilities.

Lee Selby (26-1, 9KOs) puts his IBF title on the line against a game opponent in Josh Warrington (26-0, 6KOs) on May 19 at Elland Road Football Ground, Leeds, England. With the winner being tipped to face UK number one seed Carl Frampton (24-1, 14KOs) later in the year so maybe Quigg can make a case to face the loser?

In my opinion Scott Quigg is one of the best featherweights in Britain but unfortunately for him Frampton and Selby have that little bit more quality. I believe the Welshman will come through his challenge against Warrington to set up an intriguing battle with Frampton, as long as the Irishman is also successful against veteran Nonito Donaire (38-4, 24KOs)

If I am correct then Warrigton against Quigg would be a good domestic dust-up that will generate a lot of attention.

There is also the possibility of a fight against dangerous youngster Kid Galahad (24-0, 15KOs). This would be risky because defeat could stall Quigg’s career even further. Especially as the talented Sheffield-based fighter has all the ingredients to emerge as the best in Britain if he continues to fulfill his potential.

Promising young fighter Reece Bellotti (12-0, 11KOs) is another option but one that seeks no rewards for a top ten world ranked fighter like Quigg.

Alternatively he could move in a completely different direction and look to push a fight with the exciting WBC number one contender Joseph Diaz Jr (26-0, 15KOs). The American is another one of those young bucks coming through that is a contender to the thrown. A long shot maybe but certainly not off the table.

World number one and WBA super champion Leo Santa Cruz (34-1-1, 19KOs) puts his strap on the line against fellow Mexican Abner Mares (31-2-1, 15KOs). This is a rematch that will determine who is the best in Mexico. The winner should be looking at a unification match with the talented Óscar Valdez.

I think the second instalment between these two will probably end up the same as before with Santa Cruz winning by a majority decision. So a fight with 32-year old Mares could be the more inviting route back into another world title shot?

Still plenty in the locker

There are several options for Scott Quigg so it’s not the end of the world by any means for the likeable lad from Bury.

He will need to give himself time to recover from his broken nose and black eyes. Then reassess where his camp went wrong for the Valdez fight. One thing is for sure Quigg will continue to devote his life to boxing like he has always done while continuing to push the very best in what ever division he competes in. 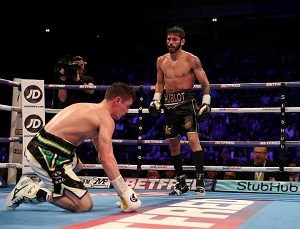